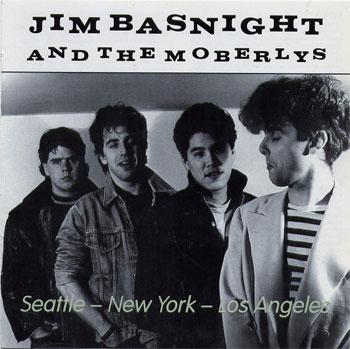 Describing something as underrated is sometimes little more than a lazy way of approaching an artist’s work. But it can have useful meaning. In the case of The Moberlys, the group could well be described that way. But the label doesn’t quite get to the heart of the matter: how can you be underrated if hardly anyone’s even heard you? That was the situation that faced The Moberlys.

When the band is mentioned, it’s often lumped into the musical bin known as power pop. That label makes many musicians bristle, and not just because one of the leading gatekeepers in the subgenre is a notorious would-be impresario who utilizes a pay-to-play model for his live events. And The Moberlys certainly transcended the tag; their music has elements of everything from punk to country-rock to Paisley Underground to heartland rock to…well, you get the idea. And sure, there’s plenty of music that would fit nicely on a Yellow Pills compilation.

The Moberlys’ music, however, never got the wide release and exposure it so richly deserved. A 1979 self-titled debut has never seen reissue, and it’s semi-rare today. In 2000, French label Pop the Balloon compiled nearly two dozen previously-unheard tracks as Seattle – New York – Los Angeles, but that disc was never easy to find Stateside, either.

So it’s quite welcome that Precedent Records (apparently an enterprise of lead Moberly Jim Basnight) has seen to the reissue of that compilation. As good as the debut album was, Seattle – New York – Los Angelesunderscores the versatility of the group. Spanning several years’ time, multiple lineups of the band and its changing bases of operations (hence the title), the album serves up loads of tunes that – in a just world – would have been hits the first time ‘round.

That’s certainly unlikely to happen now, even with the belated reissue of this set, but if it gets The Moberlys’ music into the hands (and ears) of receptive listeners, it will have served its purpose. Call it underrated, call it under-heard. But listen and you’ll call it what it is: great.