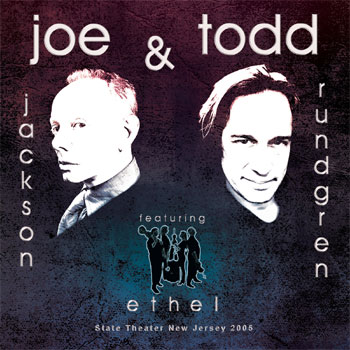 It was more than sixteen years ago that two of popular music’s most iconoclastic artists decided to work together (sort of). Todd Rundgren and Joe Jackson teamed up for a concert tour, and instead of being backed by conventional bands, they chose to work with Ethel, a string quartet (violin, viola, two cellos). It was, to say the least, an unusual combination. Ethel is perhaps more conventional than, say, Kronos Quartet, but the sort of music they make is well outside the pop idiom.

Dates on the tour were recorded, and at least one – New Brunswick, New Jersey, April 29, 2005 – was filmed as well. And now we have this belated release, featuring a complete performance on two CDs and a DVD.

Disc One opens with Ethel’s set. Relatively brief at around 30 minutes, the instrumental performances explore drawing room classical and (on the two-part “Sweet Hardwood”) something closer to an Aaron Copland classical-folk hybrid. After rapturous applause, Jackson comes onstage. His set presents several of his best-loved songs (“Steppin’ Out, “It’s Different for Girls,” “Obvious Song,” “Is She Really Going Out With Him”) in solo piano arrangements that are markedly different from what listeners will have heard on his albums. The solo readings are likely closer to his original demos, but these performances are far more nuanced than demos. They demonstrate his abilities as a singer and (of course) pianist, and include all sort of melodic bits that didn’t figure into the rock-band versions. Most notable is his cover of The Beatles’ “Girl.” He makes the tune his own.

Disc Two begins with Rundgren’s set. As is his wont, the set features hits (“Hello, It’s Me,” “Bang the Drum All Day”) and deep album cuts that are fan favorites (“Lysistrada,” “Compassion”) alongside lesser-known cuts like the stagey “Free, Male and 21” (a latter-day cousin of “Emperor of the Highway”) and “Afterlife,” the latter a song from his then-current Liars album. After accompanying himself for a few songs on acoustic guitar, he switches over to piano for “Compassion.” The song loses its stacked-chorus backing vocals, but it’s a fine performance nonetheless. He switches to ukulele for “Drum,” and then plugs in guitar (and hits the distortion pedal) for “Black and White.” Then it’s back to subtle acoustic for the last two songs. Rundgren ends with a popular set-closer, “The Wheel.”

Only as the evening’s program nears its end do all participants convene onstage. Jackson does one tune with Ethel, then Rundgren does the same; the latter’s strings-and-voice reading of “Pretending to Care” is sublime. And when they all get in on the act, “While My Guitar Gently Weeps” is something truly special. It’s so good, in fact, that it may leave listeners (or DVD watchers) wishing all the participants had combined their talents more often for the show. “”Black Maria” works, too, with Rundgren on electric guitar, Jackson on piano and a stirring string backing.

About the package itself: Even though they had sixteen years to do it, the people putting this set together didn’t see fit to include anything in the way of liner notes (other than credits). The still photos are nice enough, but the cover art – drawn from the promo posters of the event – is nothing short of dreadful. They could have come up with a catchier title, too. This unusual collection – a must-hear for fans of Rundgren and/or Joe Jackson – deserves better.