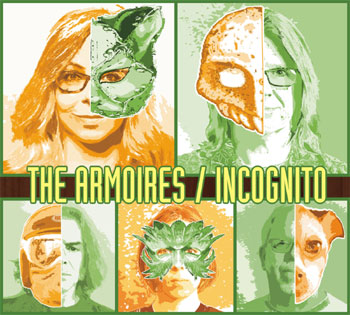 There’s a proud and creatively fertile tradition in rock’n’roll: playing dress-up, assuming an alter ego. The Beatles may have done it first with Sgt. Pepper, and six months later The Who’s The Who Sell Out found them (sort of) taking on the identity of a pirate radio station. Unmasked by no less a figure than Syd Barrett, The Moles’ “We are the Moles” was really Simon Dupree and the Big Sound. Stateside, The Four Seasons released material that didn’t quite fit their established sound under the pseudonym The Wonder Who? (the question mark was part of the name). The Turtles may have made their greatest album ever pretending to be a dozen different groups on 1968’s The Turtles Present The Battle of the Bands. The four-man Utopia adopted a Beatles persona for Deface the Music. And of course back in Swindon, England, XTC made an album and a half as The Dukes of Stratosphere.

And I’m here today to tell you about a new entry in this curious sub-sub-genre of pop, one that makes a claim to belonging on the shelf along the aforementioned efforts.

The Big Stir label has established itself as a tastemaker in recent years, releasing a dizzyingly varied swath of music from bands in (and well beyond) the powerpop idiom. They’re on their tenth or so collection of singles compilations, and those discs are staggeringly consistent in their quality. And scattered among those releases are a clutch of “undiscovered” bands with names like October surprise, The Chessie System, Tina & the Tiny Potatoes and several others.

But hey, guess what: Zed Cats, Gospel Swamps and those other bands seemingly named by a Robert Pollard disciple are in fact all one group: The Armoires. Led by Big Stir honchos (or honcho and honcha?) Rex Broome and Christine Bulbenko, The Armoires now admit that these tracks are their “cosplay singles.”

These excursions give the group the opportunity to step outside of whatever sonic parameters within which The Armoires supposedly exist. As showcased on “Bagfoot Run,” The Chessie System’s countrified style – one that owes a debt to Mike Nesmith – is certainly miles away from The Armoires’ customary aesthetic. But it’s fun.

Incognito opens in grand fashion, with an inventive cover of John Cale’s “Paris 1919” (by October Surprise) that suggests how The Move might have cut it (with the Brothers Gibb helping out on vocals).

The chirpy vocals and subtly baroque arrangements of The Yes It Is! draw from The Left Banke, The Three O’clock and Stories. Its intimidating title notwithstanding “The Night I Heard a Scream” is a sonic cousin to “She May Call You Up Tonight.” (And that’s high praise indeed.) When they apply that aesthetic to XTC’s “Senses Working Overtime,” the results are equally fascinating.

Tina & the Tiny Potatoes have a musical persona halfway between The La’s and Lisa Loeb (or maybe Sixpence None the Richer). The Ceramic Age doesn’t evoke specific thoughts of another act, but the curious “Ohma, Bring Your Light Into This Place” is a delight nonetheless. And while the band name Gospel Swamps isn’t especially appetizing, with its chiming Ric guitar, “Great Distances” is pure pop perfection. And “Awkward City Limits” is a model of alluring subtlety.

The playful vibe continues as The Armoires remove their masks for three “hidden” (as in, not listed on the package but mentioned in the liner notes) tracks. There’s a weird sound collage with an unwieldy title that takes longer to say than the track’s runtime. And there’s a sort of campfire tune. And the disc wraps up with a song that answers the unasked question: What would it sound like if Mark E. Smith fronted the Partridge Family?

A wacky concept, successfully executed: that in and of itself would be worthy of praise. But Incognito is something more than musical self-indulgence; it’s a fun listen, and thus recommended with enthusiasm.