Second Verse, Better Than the First: The Choir Reunites (Part 3 of 3)

Jim Bonfanti explains that it was the reunion of The Raspberries that would eventually lead to The Choir getting back together. “We were working on the Pop Art deal,” he says, referring to Omnivore Recordings’ 2CD release of a November 2004 Raspberries concert recording. Released years later in 2017, that album sparked renewed interest in The Raspberries.

“And then Kenny [Margolis] put one or two of the [1969 demos] on Facebook,” he recalls. “He was surprised at how many people responded, liked it and wanted to hear more.” Klawon phoned Bonfanti and asked him what he thought about self-releasing the cache of demos recorded more than 40 years before.

Bonfanti told Klawon, “I’m kind of busy working on a ‘Berries deal with a label called Omnivore, so let’s wait a couple of months until we get this all done. Because they might be interested in this; it’s kind of what they do.” 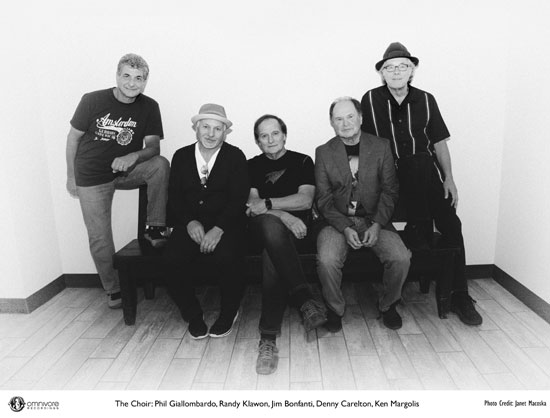 In fact label head Cheryl Pawelski and her team at Omnivore Recordings were very interested. Artifact: The Unreleased Album hit the shelves in February 2018. The release was greeted with positive reviews, but that didn’t mean that The Choir would regroup.

“I was the one who was kind of against getting together,” Bonfanti admits. He believed that his best days as a drummer were behind him. “When I quit playing in ‘77, I didn’t play any drums. I sold my drums, and I was done. I didn’t play any music until the early ‘90s.” He says that in the intervening years, he would occasionally oblige when called out of the audience to join a group onstage.

“Somebody would recognize me, or know who I was, and ask me to sit in and play a song.”
He recalls that one time when he did so, it didn’t go well. “I stunk horribly,” he says. “When I came back to the table, I told my wife Barb, ‘I can’t do this. I have to get a set of drums of some kind, just to practice a little bit. Because I’m losing it. Or I’m never going to sit in again.’” He didn’t like the idea that someone in the audience might view his performance and think, “I thought he was better than that.”

Bonfanti practiced and did quite well when The Raspberries reconvened for the 2004 concert. But more than a decade later when faced with the prospect of The Choir getting back together, his concerns resurfaced. “Sometimes it’s better to let people remember what they think it was,” he muses, “than to try and go out and [find that] you’re not as good. I was worried about that.”

He needn’t have worried. By that point Bonfanti had been keeping his chops up playing with a Cleveland band, Abbey Rodeo. And his former band mates in The Choir could still play, too. “From ’75 to about ‘85, I played in bar bands,” Klawon says. Though in the mid 1980s, Klawon quit the bar band scene, he’d continue to play. “I’ve been in my church band for 30 years,” he says.

So when the decision was made to reunite for live shows, The Choir wasn’t starting from scratch. “We actually sound better now than we did back then,” Klawon says. He believes that the band today is substantially better than the one that made those ‘69 demos, even though it’s the same lineup. “I think that [Last Call] kicks Artifact out the door,” he enthuses.

As enjoyable as the reunion concerts would be, for Klawon, the best part was getting back together with his old friends and musical comrades. “We emailed each other and knew our song list, but we didn’t know if we were actually going to pull it off,” he admits. The five musicians only had time to schedule four days of rehearsals. “But it was just magic in the room,” Klawon says. “Just being there and seeing the same faces, everybody in good health, it was amazing. And bringing the music back to life was just breathtaking for me.”

Bonfanti didn’t take it for granted that things would go as well as they did. “You’d think that by the third day, and you’re in the fifth hour [of a practice], you’re going to be at each other’s throats,” he says with a laugh. “But we never were. We just pushed through and had fun with it.” He says that a big part of the reason is that everyone involved appreciated the opportunity with which they had been presented.

“It’s something that I would have never dreamed of,” Bonfanti says. “I joked with Phil a couple of times: ‘Phil, did you ever think when we broke up, that 50 years later that we’d be practicing again? Take it a step further, that we’d have an album released?’”

He admits that a great deal of hard work went into preparing for rehearsals, the rehearsals themselves, and the reunion shows. “These are all really good musicians,” Bonfanti emphasizes. “They came prepared.” Everyone learned his individual parts at home, so when they gathered for practices, the group had a head start on the challenging material. “We put it together, and it came off pretty good,” he says. “It was a lot of fun. I love these guys; it’s so easy to work with them. There’s not an ego problem anywhere.”

“I felt confident before we did our first show that no one was going to leave thinking we weren’t as good as we were,” says Jim Bonfanti. “People would ask, ‘How’s practice going?’ I’d say, ‘This is what people are going to look like when we start playing,’ and then I’d just hang my mouth open, like ‘Whoa.’”

Randy Klawon was surprised as well. In fact, he says, all of the recent activity surrounding the band he played in a half-century ago is unexpected. The biggest surprise? He answers without hesitation. “The opportunity to sign a record deal when I’m 68 years old. That’s mind-blowing!”