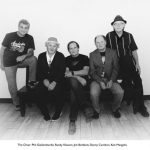 Continued from Part Two … Jim Bonfanti explains that it was the reunion of The Raspberries that would eventually lead to The Choir getting back together. “We were working on […]
Read More

Continued from Part One … The Choir certainly knew how to rock hard; the group’s cover of The Kinks’ “David Watts” made that plain. But the musicians were at their […]
Read More

Omnivore Recordings presents a live reunion of Cleveland late-’60s proto-progressive band Ask a casual rock fan if he or she has heard of The Choir, and you’re likely to get […]
Read More