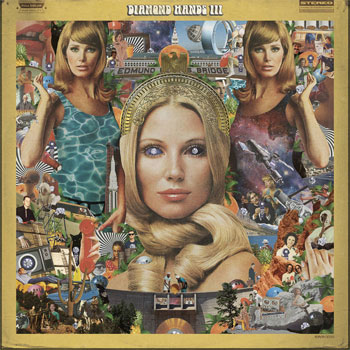 Fans of hooks and high-energy, melodic rock should stop whatever they’re doing and make immediate purchase of this LP. Diamond Hands’ III is influenced by mid-period Beatles, but it also sounds a bit like Orgone Box crossed with Grip Weeds. Yes, there are derivative elements here and there: you’ve heard that “Tomorrow Can Wait” bass lick in everything from “Taxman” to The Jam’s “Start” to The Turtles’ “Outside Chance,” but it sounds fresh and new here, somehow. There’s a sparkling Merseybeat vibe to “Any Other Girl” (a tune with live shades of The La’s), but to call Diamond Hands’ music powerpop is to do it a pigeonholing disservice.

As solid as 2018’s II was, the third long-playing outing from this Los Angeles outfit may well be their best yet. While their earlier releases called to mind a specific set of vintage influences, III seems to expand on those while sharpening focus. “Breakin’ Down,” for example, sounds a bit like Jellyfish. And the slide guitar of “Illusion Song” has a subtle paisley underground vibe. The unison bass-and-keys of “Only You” feels like a minor-key answer to the Dave Clark Five’s “Because.”

Every one of the 11 songs here is fully developed and varied, with admirable care and creativity put into the arrangements and production. All three of the band’s releases are recommended, but III may be the best entry point for the uninitiated. Most enthusiastically recommended.