Lord Sutch and Heavy Friends at 50 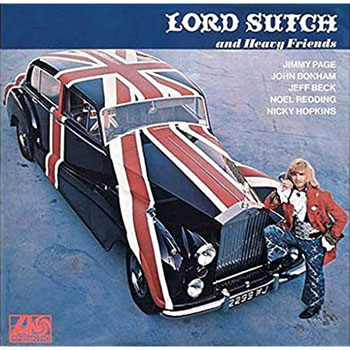 Scattered among the history of pop and rock music are the occasional oddities: albums made by those whose circumstances or talents in a particular area might not quite have suited them for the task of making an album, but who still somehow managed to do so. French millionaire playboy Philippe DeBarge did so in the late ’60s, enlisting the help of the Pretty Things; as it turned out, the fruit of those recording sessions – belatedly released as Rock St. Trop – are in fact quite good. DeBarge showed himself to be a solid singer in a rock ‘n’ roll mode, and the British musicians backing him (and in some cases supplying the material) turn in superb performances.

More well-known, more notorious and less creatively successful was Two Sides of the Moon, the 1975 solo album – the only solo album – from Who drummer Keith Moon. Despite the participation of a massive all-star cast that included Ringo Starr, Howard Kaylan of the Turtles, Ricky Nelson, Harry Nilsson, Joe Walsh, John Sebastian (The Lovin’ Spoonful), Ron Wood, Spencer Davis, Klaus Voorman, Jay Ferguson, Kenney Jones, Bobby Keys and countless others, Two Sides of the Moon is a mess. Made at a time when Moon had been carousing about Hollywood with his fellow Hollywood Vampires, it’s little more than a vanity exercise. With due respect to Moon’s undeniable drumming skills, to call him a non-singer is to engage in understatement.

Five years before Moon’s solo turn there was a curiosity called Lord Sutch and Heavy Friends. The 1970 LP ranks among the worth-mentioning thanks to both its oddball nature and the cast of players who assisted in its creation.

Born David Edward Sutch, the headline-grabbing Englishman first made recordings in the early ’60s with producer Joe Meek; like most (but certainly not all) of Meek’s output, those releases were commercially unsuccessful. Billing himself as Screaming Lord Sutch, the vocalist continued in his bid to make a name for himself, first by calling himself the 3rd Earl of Harrow (he was no such thing) and – beginning in 1963 – standing (Americans would call it running) for Parliament.

He would do so more than 40 times, and beginning in 1983 he did so representing the Official Monster Raving Loony Party. In light of the last few years of politics in the U.S. and Great Britain, it might seem surprising to modern-day readers than an unserious candidate such as Sutch failed to gain traction. But despite throwing his hat into the ring many times, he never earned more than 2.5% of the vote.

Luckily, Screaming Lord Sutch had other activities with which to occupy himself. A stage performer with an act that drew from the same set of inspirations that fueled Screamin’ Jay Hawkins (and Alice Cooper), he cut a mildly successful single called “Jack the Ripper” in the middle 1960s. He also mounted a short-lived pirate radio station. And in 1970, he decided to make an album.

Lord Sutch and Heavy Friends wouldn’t turn out to be significantly more serious than his serial candidacy, but that didn’t stop some of England’s top talent from getting involved in the project.

It’s difficult to conceive that an album featuring Jimmy Page and Jeff Beck taking turns on lead guitar could be a stinker. The participation of Jimi Hendrix Experience bassist Noel Redding would seem a harbinger of good things. Keyboards from Nicky Hopkins – who played with the Beatles, the Who, the Rolling Stones and countless others – almost always added quality. And drummer John Bonham was known far and wide for bringing the thunder.

But their participation all comes brilliantly to naught on Lord Sutch and Heavy Friends. Authorship of nearly all of the album’s 12 songs is credited to Sutch and Page, but it’s not as if the Led Zeppelin guitarist had a cache of stellar tracks left unused from his band’s first two albums (and if he did, he sure didn’t share them with Lord Sutch). The bizarrely simplistic songs exist in a kind of Troggs-like proto-punk, which on paper might read like a good thing. But the showy playing style (particularly of Page and Beck) is woefully miscast in that context.

Sutch moans “I love you / you know I do” while the band churns out a sub-”You Really Got Me” retread as “’Cause I Love You,” but all but the most irrationally dedicated fans of those involved will surely decide that they don’t love Lord Sutch and his pals. 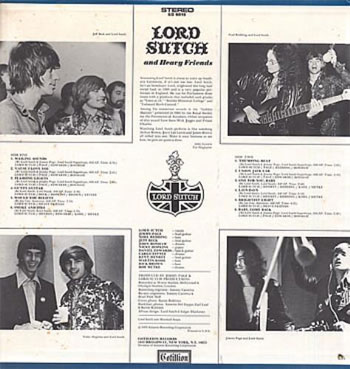 “Flashing Lights” has a good musical idea or two (at most), but the performance sounds more like a first-take jam with overdubbed Sutch vocals doing a kind of call-and-response. (To its mild credit, the kinetic bass line is pretty solid.) The laughably sloppy “Gutty Guitar” would have a hard time finding a place on a bootleg, let alone a legitimate release. Sutch’s inability to, y’know, sing doesn’t help matters, either. The muddy production likely works in the track’s favor, masking some mistakes that the musicians would just as soon listeners didn’t hear.

The bouncy “Would You Believe” features a drummer – we can’t be sure which one – who seems to be playing behind the beat; he makes no attempt to catch up. One might guess that a massed vocal chorus would mitigate the damage, but it sounds as if Beck and Page are doing the singing. And neither is known as a vocalist (check out Beck’s “Hi Ho Silver Lining” if you need convincing).

“Smoke and Fire” finds Sutch sounding just a bit like Ozzy Osbourne, and the echoey production adds a slightly sinister vibe. But the anemic playing – with random stabs of guitar that suggest a guitarist who’s thinking, “will you just shut up and let me solo?” – destroys what few virtues the track might have.

If you don’t mind a recycled blues riff trying to pass itself off as an actual song, “Thumping Beat” is pretty good. But Sutch roars along while the band cranks out this standard-issue one-four-fiver, and even a semi-decent guitar solo can’t redeem things. “Union Jack Car” features a different blues pattern, but it’s still one you’ve heard a thousand times before. And trust me on this: all thousand of them are better executed.

“Brightest Light” seems flown in from a wholly different session; it has a character that vaguely suggests Delaney & Bonnie. But fuzz guitars intrude, making the song feel more like a ’60s teenage garage band’s attempt at creating progressive rock. Oh, and Sutch sings while a chorus chirps, presumably po-faced, in the background. The end attempt feels like a track left off of Spinal Tap’s nonexistent Spinal Tap Sings “(Listen to the) Flower People” and Other Favourites.

Elsewhere, the list of songwriters who could stake a claim of copyright infringement upon “Baby, Come Back” could easily stretch around the block. (None of which is to suggest it’s half as good as any of the tunes it rips off.)

The whole affair has the character of a quickly dashed-off session, the kind of thing that the participants would prefer we all forget. Page in particular was by 1970 the veteran of countless gun-for-hire studio sessions, so one could rightly expect more from him than what’s on offer on Lord Sutch and Heavy Friends.

If one can imagine the whole album as a kind of piss-take, a sort of “Sure, we’ll take your money, knock back a few pints and play on your silly record,” then Lord Sutch and Heavy Friends makes a bizarre kind of sense. Otherwise, it doesn’t.

Perhaps the only thing more remarkably strange than the existence of this wholly ill-advised 1970 LP is the fact it actually sold, reaching #84 on the Billboard album chart in the U.S. That the names Page, Bonham, Beck, Redding and Hopkins appeared in large white letters on the sleeve may well have had something to do with all that.

No, wait: here’s something more shocking: Lord Sutch and Heavy Friends somehow got clearance to make another album. Released in 1972, Hands of Jack the Ripper featured Deep Purple’s Ritchie Blackmore (who had backed Sutch a decade earlier), Redding, Procol Harum’s Matthew Fisher and – at least this makes some sort of sense – Keith Moon. This time around, Jimmy Page was either too busy or too smart to take part. You may not be surprised to learn that it, too is a shambolic affair, sounding for all the world like the soundtrack of a bunch of drunken louts set loose in a recording studio. (Fisher’s playing is ace, but that alone isn’t enough to recommend it.)

Proving yet again that at least some rock fetishists will buy any shit if it’s presented to them, Lord Sutch and Heavy Friends has been reissued many times in the CD era. Such otherwise sensible reissue labels as Wounded Bird, Sundazed and Esoteric Recordings have seen fit to re-press the album, sometimes even on vinyl. A few less scrupulous labels took a slightly different approach, putting the session players’ names first and foremost, making little or no mention of Sutch and re-titling the steaming pile of musical excrement Smoke and Fire.

After years of losing at the ballot box, Lord Sutch scored a win of sort in 1998 when BBC ran a poll. Lord Sutch and Heavy Friends won the right to be known as the worst album of all time, besting (worsting?) such gems as Atilla (bombastic hard rock featuring a young Billy Joel), the film soundtrack from the Bee Gees vehicle Sgt. Pepper’s Lonely Hearts Club Band, The Shaggs’ Philosophy of the World (hey, some people love it) and the 2011 Lou Reed/Metallica pairing Lulu.

P.S. Do I have an original copy of the vinyl LP in my collection? Well, of course I do.