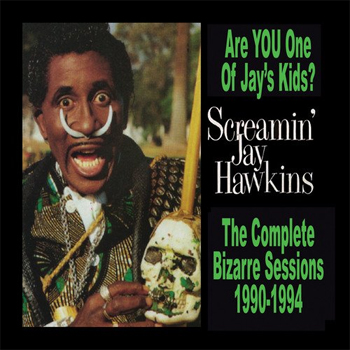 Screamin’ Jay Hawkins (born Jalacy Hawkins in 1929) is one of those artists whose influence would far outpace his commercial success. Trained as a classical pianist and singer with an operatic range, Hawkins instead gained notoriety for his outlandish persona and over-the-top vocal style, exemplified by his 1956 single “I Put a Spell on You.” The song’s unhinged delivery was the result of Hawkins having been drunk during the recording session, but the persona stuck, and he was added to Alan Freed’s revues. There he pioneered shock rock, emerging onstage from a coffin dressed in a cape and holding voodoo paraphernalia. There have been many covers of “I Put a Spell on You” since, including notable versions by Creedence Clearwater Revival, The Crazy World of Arthur Brown, Bette Midler (in the film Hocus Pocus), Annie Lennox, Nina Simone and Jeff Beck.

Hawkins would record sporadically over his subsequent career, and at the beginning of the 1990s he met with Robert Duffey, who would sign Hawkins to his label and act as his manager. Hawkins released three albums for Bizarre/Planet: 1991’s Black Music for White People, Stone Crazy from 1993, and 1994’s Somethin’ Funny Goin’ On. Long out of print, all three have been reissued in a new 2CD set, Are YOU One of Jay’s Kids?: The Complete Bizarre Sessions 1990-1994. (The compilation’s title is a reference to Hawkins’ having sired more than 50 children, nearly all out of wedlock.) The three albums on Bizarre represent some of Hawkins’ final work in the recording studio prior to his death in 2000. I spoke with Duffey about his time working with Screamin’ Jay Hawkins.

When you first met Jay Hawkins in 1990, it had been about seven years since he had made an album. What had he been up to in those intervening years?

He was basically playing at little clubs: I went to see him a couple times at Club Lingerie on Sunset Boulevard and the Belly Up Tavern in San Diego. He was playing those places, and tiny dive bars. Minor money, but it kept him going. But really, he wasn’t doing much of anything. And most of the people – 99%, I’d say – had no clue who he even was. It was just this black guy playing on the stage.

Did he have a regular band, or did he just pick up players for each gig?

Both. He had a few guys that he played with every so often. When they weren’t playing with somebody else, they did something with him, but it was only kind of a band. He wasn’t doing the [number] of shows he needed to do to support a band; that’s what the big problem was.

The players on his three albums for Bizarre – Mike Keneally, Buddy Blue and so on – weren’t among those, were they?

No. It was all different people.

What was Hawkins like in the studio? Was he focused, erratic?

Well, he was fine until about 1:30 p.m. At 1:30, he would take these pills, and basically he was out of it from there on. You could record with him from 9:00 in the morning until maybe 1:00, and after that he was just gone. I know part of it was codeine. He said it was because in the war he had a bullet in the brain – now, this is Jay’s story – and he had a piece of metal put in there. It was so painful that he would have to take these pills. The reality is that he was addicted to the pills.

Once the songs were chosen, did the musicians get together and sort them out? Were you or Jay involved in that process?

I was more involved in the lyrics; Keneally was more involved in the music end. I would come with some ideas and he would help put them together. And a lot of times, Jay would come into the studio, sit down at the piano, and just start banging things out. We would take what he was doing and make songs out of it. He had a lot to do with writing the songs, but that’s pretty much how it was done. 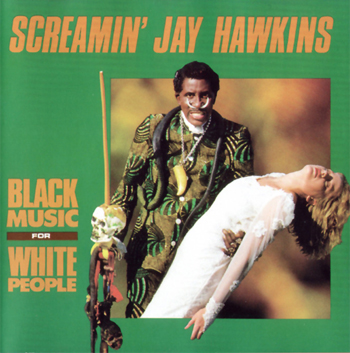 Up until about 1:00 p.m. each day, did the sessions go fairly smoothly? Or did it take a lot of time and effort?

Did he cut his vocal parts after the other musicians had done had done the basic tracking?

No, he cut his vocals and piano live with the band. And then as soon as he was done with his vocals, we would do overdubs right away.

Did Hawkins get involved in things like approving the mixes, or was he the kind of artist who did his bit and left the rest to you guys?

He wasn’t really that concerned. He just said, “It’s your thing. Do what you wanna do.” We were there until probably 1:00 or 2:00 in the morning – every morning – mixing, correcting, and doing what we needed to do.

The track “Ignant and Shit,” included on this set and originally on Black Music for White People features a particularly spirited and unhinged vocal from Screamin’ Jay. How did that Hawkins original come about?

We were goofing around. He would – I’m trying to think of how to say this without sounding offensive – he would speak “black.” His idea of black. He would actually speak to me that way. So, when he was just goofing at the piano, he said something to me, and I said, “Jay, you ignant.” And he wrote a song. We just let the tape run while he would pound some stuff out on the piano, talking to me that way.