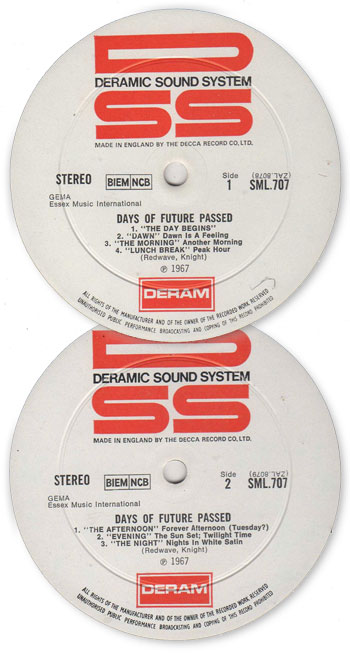 There wasn’t a great deal of precedent – either within the group or on the pop music landscape – for Days of Future Passed when the Moody Blues recorded their (sort-of) debut album. The British quintet had only just reinvented itself with a new lineup and a new sound, built in large part around the Mellotron, played by keyboardist and founding member Mike Pinder. That instrument – previously used so effectively on an influential handful of Beatles tracks (and intriguingly by Brian Jones on the Rolling Stones’ Their Satanic Majesties Request – finally afforded rock bands the ability to incorporate “classical”-type sonic textures in their music in a relatively practical fashion.

The hybrid rock/pop and classical (or at last classical-leaning) aesthetic of Days of Future Passed hadn’t been attempted by many significant artists prior to the Moodys’ effort. At roughly the same time as DOFP was being made, Love’s Forever Changes was being recorded more than 5,000 miles away. But the baroque textures of Love’s album – impressive though they would be – were far less ambitious than what the Moody Blues (along with producer Tony Clarke and conductor/composer Peter Knight) would achieve with Days of Future Passed.