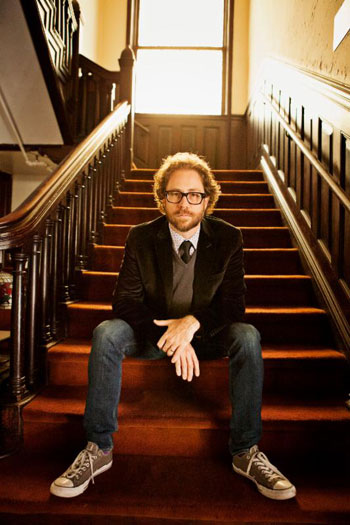 Brooklynite Jonathan Coulton has been making albums for years without becoming a household name, but he made news in 2011 when he told an NPR interviewer that he was making more than half a million dollars a year from his music.

Operating completely outside the traditional musical industry, Coulton nonetheless makes highly tuneful, accessible pop rock. His songs often focus on technology and pop culture, often in whimsical ways. His latest album, Solid State takes his concerns to the next logical step: the concept album. There’s even a companion graphic novel by Matt Fraction. But in an age of downloads, is there a place for albums, much less thematically unified ones?

“I grew up in the ’70s, and albums still remain an important concept for me,” Coulton says. “I think whether it’s a sci-fi concept album like Solid State, or whether it’s just a collection of songs that an artist was doing at that time, that kind of bundling is a nice snapshot of what they’re thinking about.”

But Coulton recognizes that people consume music in different ways. “One of my favorite things about my job is that I get to work on all these different projects,” he says, mentioning a song he wrote for the video game Portal, and music for the TV show BrainDead. “These are very different creative challenges and very different ways of using music and storytelling,” he says. “It’s nice that I get to mix it up in that way.”

Coulton is touring in support of Solid State, and he shares several show dates with friend Aimee Mann, who sang on “All This Time” and other tracks on the album. “I did some singing and playing on her album, too,” Coulton says, “so it made sense for me to open for her. Synergy, they call it.”

Jonathan Coulton values the contributions of other musicians on his records. “You get a little bit of everybody’s musical DNA in there, and it’s kind of exciting,” he says. But for the most part, Solid State is the product of him working with producer Christian Cassan. Coulton admits that when he began the album project, he wasn’t sure of its eventual direction.

“It felt safer for it to just be me and Christian,” he says. “That way, I could sort of control things as they were developing. And then once we were into it, it was like, ‘Oh yeah, we really like what’s happening. Let’s keep going!’”

Critical reaction to Solid State has been positive, but that doesn’t mean listeners should expect a sequel. “Next time I write an album, I don’t want to start with too ambitious an idea,” Coulton says. “But if one arrives, I’m game.”