A Look Back at ELP with Carl Palmer, Part Three

Bill Kopp: With the benefit of studio technology, bands in the early ’70s could overdub and make really dense, layered albums. Reproducing that sound onstage was another matter, especially for a three-piece, I would imagine …

Carl Palmer: Of course we didn’t have MIDI in those days, so we couldn’t trigger more than one keyboard at a time. [Now] you can play one keyboard, and have four or five of them firing off, and they can sound a lot bigger and fatter, more orchestral sounding. We couldn’t do that then. So when we did overdub on an album – say, like Trilogy – you ended up having something that couldn’t be reproduced onstage, because the technical aspect wasn’t available. The technology wasn’t there; we couldn’t do it.

We were always way in front. The first electronic drum solo is on a piece by Alberto Ginastera on the Brain Salad Surgery album, a piece called “Toccata.” People thought it was the keyboard that was doing that, but it was all from the drums! They were made to trigger electronic sounds from the drum; these were all preset sounds, and they could be changed by an octave divider. The drum solo was really abstract, and we thought it worked really well. We didn’t advertise, “this is an electronic drum solo,” because we weren’t about that. We were about producing a wall of sound our way. We didn’t care what people thought, as long as we knew that we were always one step in front. And we always were, to tell you the truth. Until, as I say, we got to Love Beach.

BK: It seems that – with the possible exception of Trilogy – a lot of the music that you put together was something that you could more or less recreate live onstage. Was that a conscious goal?

CP: No. It wasn’t a conscious goal. Our goal was pretty much the same goal as I carry on until today. I play a lot of ELP music; I play Pictures at an Exhibition and Tarkus, and I play them all instrumentally with virtuoso musicians. I don’t have any keyboards; I have two guitars. And they’re sensational. And all I’m doing today is exactly the same premise, the same thing that ELP laid down when we made those tracks. We said that if the backing track does not sound like a dynamite, explosive instrumental before we put a voice on it, something’s wrong. And that’s the way ELP conducted itself. So the backing tracks were always fabulous anyway, even before the vocal went on. So then when we put the vocal on top, then you had another gain again. The backing track had to sound like a killer instrumental. And most of the time, we succeeded. 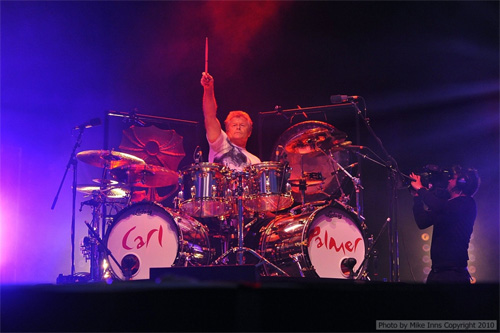 BK: Which ELP album is your favorite, and why?

CP: I would say Brain Salad Surgery, mainly because we were at the creative pinnacle of our powers. We never played all of it onstage, incidentally. Not because we couldn’t; it just didn’t work in a live situation as well as it worked as a recording. Mainly because of technology, and the limitations we had of not being able to sound as “big” as we needed it to with three people. Because that was another album which was heavily overdubbed.

On the other hand, I would say to you Trilogy, as well. And Pictures at an Exhibition; probably those three. Trilogy is heavily overdubbed. What happened is, we came off the rails. We started adding a bunch of stuff, saying, “Yeah! We got it!” And then we’d say, “But if we add another line, another melody going up the back of the chorus the second time around, going into the middle eight before the instrumental section, that would just tie it up!” And before you know it, Keith [Emerson] would go out into the studio, and he would play 6 or 7 lines, and they would make you cry. You wouldn’t know which one to pick. We’d pick one and put it on, and before you know it, we’re in overdubbing mode. And we know we can’t reproduce this onstage unless we had auxiliary musicians. Which we never did, but we could have done. Because it was becoming a music industry standard; Pink Floyd have had backing musicians; the Rolling Stones, the Who … you name it. But we didn’t do that, unfortunately. When we did do it, we took out a whole orchestra! 54 people! We messed up. But that’s another story.

BK: You mentioned Love Beach, which is of course notoriously unpopular among fans. As the story goes, that’s when things went a bit sideways for ELP. But I have to say: listening to the new 3CD set The Anthology, when the title track from Love Beach came up, I didn’t have the track listing in front of me. And once I realized what it was, I thought to myself, “Y’know, this is better than I remember.”

CP: Well, that’s nice. Listen: music has got legs. This music will be around for a long, long, long time. And it’s all in the writing; the lyrics are incredibly mature. I have no problem telling people that I don’t like something [we did]. And we weren’t sure [about it] when Love Beach came out. But if you play certain tracks, you might say, “Wow, yeah.” It’s not exactly prog rock or cutting-edge, but … great tunes played really well.

There’s a piece on there by [Joaquin] Rodrigo, “Canario,” a classical piece. We absolutely nail it; it’s unbelievable! I still play it today; I haven’t played it this year, but I played it last year as part of the repertoire. So there are so many great, great things. If you listen to Brain Salad Surgery, there’s a lot of depth in that. I wouldn’t say that just because I’ve been in the band, and had a great time in the band.

There’s been a lot of controversy over the years with myself, Keith and Greg [Lake]. They had even got another drummer [Cozy Powell] in for awhile. But at the end of the day, I can truthfully say that the music that was made when I was there is here to stay. 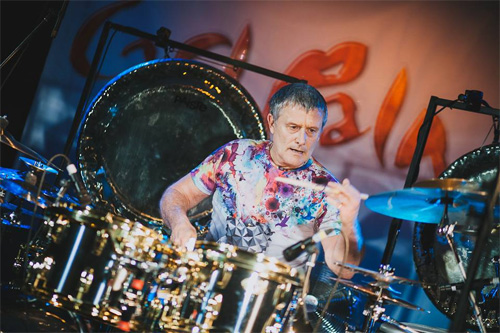 BK: ELP had an amazing run in the 1970s. With all that you accomplished, do you ever look back and think there was anything that ELP left undone, didn’t quite realize a goal?

CP: The only thing that I can say to you – you know, unfortunately Keith committed suicide the beginning of this year, which was extremely tragic – we were going to play together this year. Not as a group; Keith was going to come along and be in my band, Carl Palmer’s ELP Legacy. He liked the group, and he said he would come along and play maybe one night somewhere.

There is a tribute to Keith that is coming out on DVD, with people like Steve Hackett on guitar, and Mark Stein from Vanilla Fudge singing, a choir singing “Jerusalem,” and a contemporary dance group. One of the things that ELP talked about – which is why I used dancers and things – was getting involved with ballet or dance, and orchestra and auxiliary musicians. We talked about that, but it never really happened. So I did some of the stuff which we talked about but didn’t do. But ELP, I would say, fulfilled most of its dreams very quickly, but there was the odd thing which we didn’t do. We did do the orchestra thing, but unfortunately we didn’t do it for very long: three weeks. It should have been six weeks, but things weren’t going our way as far as selling tickets, so we had to look at the situation. But all in all, I would say we completed most of our dreams.