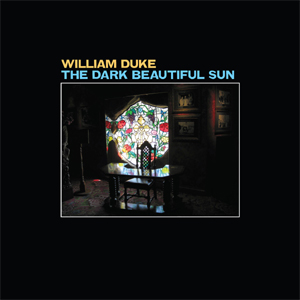 There’s always room for an album of fine music in a Tom Petty-meets-Brian Wilson vein. What, you say? Well, William Duke‘s latest, The Dark Beautiful Sun – even the title sounds like a Brian Wilson idea turned on its head – nicely veers between the chiming, good-timing feel of Petty (and even Traveling Wilburys) and the close-harmony melancholia of prime-era Beach Boys. The shimmering album opener “The Golden Ring” packs all of that more tightly into a three-and-a-half-minute pop song, setting the stage for the rest of the disc.

I often mention an undeservedly obscure group called Starling Electric, and in places on this disc, Duke sounds like a bit them. Elsewhere, it’s catchy guitar figures, sharp hooks and friendly handclaps, as on the title track. Some artists are unusually effective when they stack their overdubbed vocals, and Duke is among that crowd. “Kyoto Sunrise” is a beautiful Mellotron infused, eastern feeling piece that reminds me of Pink Floyd‘s “Grantchester Meadows.” It’s over too soon.

The country flavor of “Sons and Daughters” evokes for me memories of another unjustly unknown group, Warm in the Wake. Again, even though the arrangement and instrumentation are lovely, it’s Duke’s vocals that star. “Many Years Away” is pleasingly twangy in a Poco or Flying Burrito Brothers kind of way. Duke’s subtle use of glockenspiel adds just the right texture, and Richard de Motta‘s simple yet tasty guitar leads are warmly memorable.

The watery effect on Duke’s vocal on “The Truth Comes Out at Night” adds just the right element of drama and unease, complemented well by the Leslie-fied Hammond organ. The tune brights in its second half, illustrating Duke’s command of song arrangement. The dual lead guitars on the song’s outro are the icing on the cake.

The manner in which “Just Lookin’ for Some Sleep” seems to end and then restarts for a dreamy coda is reminiscent of some of the best qualities of late 60s pop music. “The Great Escape” is appealing, country-flavored rock/pop, the kind that scored the charts in the 70s. Its lyrical referencing of Robert Frost‘s poem, “Stopping by Woods on a Snowy Evening,” is a nice touch, as it fits seamlessly into the song’s subject matter.

Gordon Lightfoot‘s “Summer Side of Life” is the sole non-original on The Dark Beautiful Sun. Duke makes the tune his own, and his bass work – simple but effective – anchors the song. And his Mellotron strings are note-perfect.

Despite its title, “Your Laughter Fills the Room” strikes a melancholy tone. The vocal arrangement – a quality that’s consistently strong throughout the disc – is at its peak here. And the Leslie effect on the lead guitar is lovely. The album wraps up with “1977,” a Moog-Mellotron-acoustic guitar outing that wouldn’t have been out of place as a link track on an Alan Parsons Project album of the 1970s. The track’s abrupt ending will shake the listen out of the reverie of immersion into The Dark Beautiful Sun. And it’s a finely-tuned close for an albums that’s an understated pleasure from start to finish.