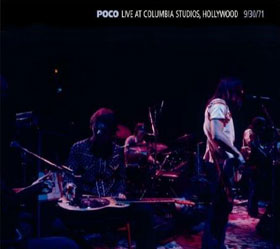 There are two truisms — well, maybe there are more, but I’m only interested in two at the moment — when it comes to country-rock. The first is: The Eagles suck. The second, a corollary, is this: Buffalo Springfield was brilliant.

In between the two there was Poco. Closely related (in a Pete Frame sort of way: over time, the group’s lineup included two former Buffalo Springfield members and two future Eagles) to both bands, Poco nonetheless leaned strongly in the direction of the Springfield in terms of quality. Combining country influences and sensibility, Poco delivered their music in a style that caused rock fans — the kind who generally had no use for C&W — to say, “hey, this is pretty damn good.” With a style that followed in the grand tradition of the Byrds, they rocked, and hard. But they did so while staying true to the best qualities of what modern-day listeners might call Americana: close harmonies, storytelling lyrics, concise arrangements.

Right around the time of the release of Poco’s fourth LP From the Inside, the band performed something of a private/warm-up concert for invited guests at the Columbia Studios soundstage. (I’m not 100% certain of this, but I believe the venue is the same one famously used to record side one of Paul Revere and the Raiders‘ major label debut Just Like Us.) That date is documented on the new Collectors’ Choice disc Live at Columbia Studios, Hollywood 9/30/71. CCM’s first foray into the world of archival live releases, the Poco set bodes well for the future. The sound is exquisite, the liner notes (uncredited, but quite possibly by Richie Unterberger) offer depth and context, and — most importantly — the performance is a delight.

It’s been said before, but it’s truly amazing to hear Rusty Young‘s steel guitar sound like a Hammond B3 organ. And the texture of the vocals is such that listeners don’t even have to pay attention to the words if they don’t want to. Throughout the fourteen songs, Poco delivers a set that should please fans of both country music and the heavier, rocking sounds of early 70s rock. There are plenty of highlights on the disc, whether one is attuned toward instrumental breaks, lyrics, vocals or ensemble playing.

On “What a Day” Poco sounds uncannily like Moby Grape, another band that never got its due. And on “Railroad Days” Paul Cotton‘s voice sounds like Stephen Stills.

None of which is to suggest that Poco didn’t have ideas of their own. Perhaps they were ahead of their time: the Eagles certainly got a lot further with a similar (but ultimately inferior and less satisfying) approach a few years later. Frequent personnel changes didn’t help, of course. By the time of this ’71 date, only three members remained from the original lineup that had risen from the ashes of the Buffalo Springfield. In many ways Poco took the rock from the Springfield, while CS&N took the folk.

Genuinely exciting playing is the order of the day on Live at Columbia Studios. The set is not filled with hits, since Poco didn’t have any in those days. Their jubilant shoulda-been-a-hit “Good Feelin’ to Know” was still a year or so in their future. But there’s plenty of good singin’ and playin’ in the set. This disc is recommended for anyone who thinks that both Sweetheart of the Rodeo and Buffalo Springfield Again are essential albums. Poco may mean “little” in Spanish, but the beauty and sincerity of the music on this set is no small thing.