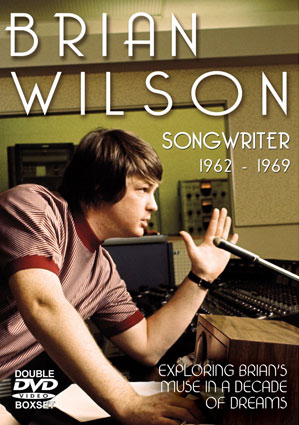 There’s so much good here, I almost don’t know where to begin. The new 2DVD set Brian Wilson Songwriter 1962-1969 is an in-depth look at the musical innovator and, yes, genius. It’s an oft-overused word, but Wilson’s particular genius lay in his ability to synthesize a number of elements: the southern California beach/surfing mythos, the pain and joy of youth, the pain and joy of growing to adulthood, and just plain pain and joy.

Much has been written and filmed about both Brian Wilson and the whole Beach Boys saga. Some of it is credible, some not. Some has been disowned by its authors (for example, Wilson’s own “autobiography”) and some has been discredited, at least in part (see: Gaines, Steven). But part of what makes Songwriter 1962-1969 special is that it draws upon the expertise of many of those who truly understand and appreciate Wilson’s gifts. As opposed to being the sorts who trade in scandal and lurid stories, the contributors to this expansive production are heavy hitters with established track records.

From the actually-played-with-Wilson category, we have — among others — Carol Kaye and Hal Blaine. The Wrecking Crew bassist and drummer both weigh in extensively, putting the lie to some myths that have grown up around Wilson. Both display an interesting paradox: they were at once sympathetic to (and willing participants in) Wilson’s musical excursions, yet they were often bewildered and confused about where he was headed musically. But it’s a testament to both them and Wilson himself that (at least according to their reminiscences) they had a good bit of confidence and trust in Wilson. So even when they didn’t “get” him, they went along. And they were rewarded for that with involvement with some of the most beautiful music of the modern era.

David Marks — an early member of the Beach Boys — contributes a good bit of commentary as well. His insights are valuable, especially in light of the fact that he’s both “inside” (as a touring and recording member in those early days) and “outside” (as an ex-member who still remained in contact with the band). His perspective is useful.

Also quite candid in his comments is Wilson’s sort-of-replacement in the band, Bruce Johnston. Surprisingly self-effacing, Johnston provides another counterbalance to many of the stories that have grown up around the band. Was Mike Love really the dick he’s often made out to be? Did Mike “don’t fuck with the formula” Love really fight against Brian’s more high-minded projects like Pet Sounds and SMiLE? The answers are sorta-yes, but he wasn’t alone in his concerns. And his positions were — on some levels, at least — not without merit.

Producer Russ Titelman, former Three Dog Night vocalist Danny Hutton, Beach Boys auxiliary guitarist Billy Hinsche, engineer Bill Halverson: all have plenty to say, and it’s all worth hearing. Though this DVD project is not officially sanctioned by the Beach Boys (if it were, Mike Love would likely be portrayed as the hero of all projects) nor Wilson (if it were, a more sanitized documentary would have probably been the result), it’s perhaps as close as we’ll ever come to a Beatles Anthology-style look at Wilson’s 1960s work.

One of the most poignant moments in the film comes as part of the bonus materials. Former Beach Boys manager Fred Vail tells the story of working an early 70s single, visiting radio programmers in hopes of getting the song playlisted. With a lump in his throat and tears flowing from his eyes, he relates how he was told that the Beach Boys were no longer hip. Forty years later the memory stings him, and viewers will be likewise moved.

A musicologist contributes some serious muso comments on Wilson’s facility for creating music that was at once simple and complex, and makes a convincing argument for Brian Wilson as a serious composer. Biographers Peter Ames Carlin and SMiLE scholar Domenic Priore offer their particular expert testimonies as well.

The entire double-DVD presentation is built around a clip from the Leonard Bernstein-hosted TV special Inside Pop: The Rock Revolution, a 1967 look at then-current songwriters. Brian is shown performing his then-unreleased “Surf’s Up” on solo piano.

Plenty of archival footage is included. In fact for a project that’s not approved by its subjects, Songwriter 1962-1969 is well balanced in terms of live footage, talking-head interviews and tracking-shot still photos. There’s even a good chunk of studio-verite audio, including the infamous incident in which a drunken Murry Wilson horns into a “Help Me, Rhonda” studio session.

If you’re interested in a richly contextualized look at the musical and personal development of Brian Wilson in the 1960s, three hours spent with this DVD set will fly by. Unflinching in its look at the artist but lacking a salacious agenda, Brian Wilson: Songwriter 1962-1969 is a do-not-miss DVD for anyone with an appreciation for Wilson’s gifts. And yes, for SMiLE fanatics like myself, there’s plenty here to make you happy too.