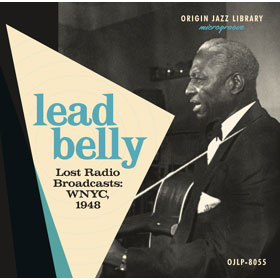 In 1948, on a Sunday evening in August, a new radio series premiered. Featuring beloved and renowned folk singer Huddie Ledbetter (aka Lead Belly), The Story of Folklore presented the then-fiftyish Lead Belly doing what he did best: singing songs accompanied only by his acoustic guitar, and introducing the songs with brief spoken interludes. As was the standard practice, the shows would be recorded, pressed onto 16” “aircheck” discs and then broadcast shortly thereafter. The source for this vinyl release is a set of 78rpm 12” discs cut from a playback of those aircheck discs. The resulting quality is quite clear for a recording of this vintage, and the modern-day producers (noted jazz author Cary Ginell and Michael Kieffer) are to be commended for their largely hands-off approach that seeks only to present the performance its best form.

Modern listeners who know “House of the Rising Sun” from its popular interpretation by The Animals may be surprised to hear Lead Belly’s upbeat, almost happy reading of the tune. On “Leavin’ Blues,” the guitarist shows his skill with the twelve-string; he often sounds as if he’s playing more than one instrument (he’s not; nothing like overdubbing existed in the 40s).

Side One presents the August 1 program, and August 15 episode is documented on Side Two. The song list is similar for both episodes: both include brief run-throughs of “Irene” as the opener and closer, plus distinctly different versions of “House of the Rising Sun” and the astounding guitar workout “Hollywood and Vine” (almost prototypical rock’n’roll, Lead Belly characterizes it as “a little boogie”). The man billed as “American’s greatest living folksinger” performs “Backwater Blues” and “Leavin’ Blues” on the first session, with a focus on love songs of a sort (“If It Wasn’t for Dicky” and “Careless Love”) on the second-documented show. The bits of banter between Ledbetter and the (unidentified) announcer are a bit stiff, but they may have served to guide listeners into the somewhat unfamiliar musical world of Lead Belly.

The disc captures the first and third episodes of The Story of Folklore, and the announcer makes mention of the program format for the fourth episode (spirituals), but only these two episodes have surfaced. Presumably the series didn’t continue for much more than four installments total.

The vinyl release of Lost Radio Broadcasts: WNYC, 1948 is pressed on beautiful translucent blue vinyl, housed in a sturdy full-color ten-inch sleeve, and includes a well-put-together liner note booklet that provides background on the recording, the songs, the performer, and the modern transfer of the recording. Happily, the entire project was done with the blessing and cooperation of the Lead Belly Estate.