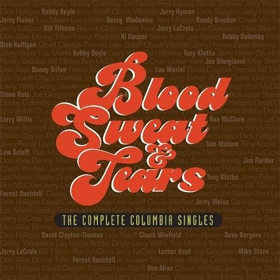 For some years there, BS&T was a true hitmaking juggernaut. And a lot of their music was – for whatever reason – the kind of thing that your parents might have admitted to liking, too. Maybe that’s down to the tight horn work, done to arguably less appealing effect by Chicago. Or maybe it’s the vocals of David Clayton-Thomas, though I’d give him the award for Pop’s Most Annoying Vocalist.

This 2CD set collects all the a- and b-sides, including many most will find unfamiliar. The 1968 debut single, “I Can’t Quit Her” b/w/ “House in the Country” is excellent, and puts the lie to the idea that the soon-departing Al Kooper was an unsuitable vocalist for the band. Said band had a veritable revolving door; the sixteen songs on Disc 2 cover the band’s post Clayton-Thomas period. The twelve pages of liner notes devote just over a page to the second half of the band’s catalog. Still, there’s good material throughout. Those looking for a best-of should keep moving; too much to see here. But for an overview of the band’s more commercially-minded material (read: singles), it’s an ideal survey.