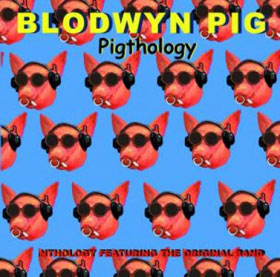 On their two well-regarded late 1960s albums, Blodwyn Pig forged a singular musical path, one some might say paved the way for such acts as Roy Wood’s Wizzard. This is epecially true on tracks like “Drive Me” from 1970’s Getting to This. Elsewhere they sounded not wholly dissimilar to Jethro Tull; this is unsurprising in light of the fact that founder Mick Abrahams played guitar in Tull’s early lineup.

While Blodyn Pig formed and re-formed over the years, the two albums cut before their initial 1970 split form the core of what the group is remembered for. Subsequent lineups included Peter Banks (later of Yes and even later of Flash), but the sonic centerpiece of the group was the jazz-leaning Jack Lancaster. He played saxophone, flute, violin and (occasionally) piano.

Fast forward to 2013. The original lineup – not some of ’em, but instead all of ’em — have reunited to release something called Pigthology. I approached this release with some trepidation, owing to the fact that its provenance is a bit murky. Yeah, all the guys are here on this album subtitled “An Anthology Featuring the Original Band.” In addition to Abrahams and Lancaster, original bassist Andy Pyle and drummer Ron Burg are on board. So far, so good, right?

Here’s where tings got troubling, where red flags popped up. The term “Anthology” connotes – but doesn’t strictly mean – a collection spanning an artist’s career. Most people think of Beatles Anthology, a collection of unreleased material from the old days, chronologically sequenced. But a look at the back cover of Pigthology shows that among Lancaster’s instrumental credits is this: “Yamaha WX7.” If you don’t know, I’m here to tell you that the WX7 is a modern MIDI (Musical Instrument Digital Interface) device. Simply put, it’s a synthesizer controller that one plays like a wind instrument. It was first sold in…1987. Math enthusiasts might note that this is some seventeen years after the release of Getting to This.

So Pigthology is an adventure in modern recording, then? Well, it’s simply too tough to tell. The liner notes – penned by Mick Farren, who has since passed away – notes that most of the recordings on the album are from the period during which the band “played alongside Led Zeppelin, The Who…” and so on. That places this recording in the late 60s or 70s. So which is it?

At its core, this question is one that ought to be simple enough to answer. But neither the packaging nor liner notes* clear up the mystery. What we’re left with is the music.

And of course that’s what it’s all about. Regardless of when the band cut these twelve tracks, they had it together. That curious British interpretation of the blues, imbued with a roadhouse boogie feel, forms the foundation of the songs. Lancaster’s jazz feel pulls things in that direction. The end result sounds – once again – like Roy Wood’s solo work, and his recordings with Wizzard and with the Super Active Wizzo Band. Beefy sax lines give the band a grittier sound than Jethro Tull ever had; this stuff rocks a lot harder than Ian Anderson‘s band ever did, and sports little in the way of medieval trappings (even when Lancaster’s blowing flute).

Yet Blodwyn Pig are pleasingly eclectic. On “Dear Jill,” acoustic slide guitar and fiddle create a folk-blues ambience that is extremely atmospheric. A few of the tracks don’t work: “Monkinit” sounds not at all like the product of an actual band; nearly everything about it – especially the stuttering drums – sounds like a band-in-a-box, laptop-sourced recording. Maybe not, but that ‘s what it feels like. Only Abrahams’ stinging guitar playing saves it from being completely bloodless.

But that’s the exception. Most of the material here – regardless of when and how it was created – is first-rate. A remake of “Drive Me” adds little to the 1970 original, but it’s still worth hearing; Abrahams is in fine voice, belting out the tunes in a Lonesome Dave Peverett style. An acoustic live reading of “The Change Song” shows off the group’s perhaps-unexpected quiet, reflective side. “Cosmogification” does The Average White Band one (or two) better, wedding the funk of that group’s style with the ambition of Colosseum. “Same Old Story” rocks like mad, and an instrumental country blues “Sly Bones” is a highlight.

“It’s Only Love” amps things up again, and would have sounded right at home on 1969’s Ahead Rings Out or the second LP. Save for an unnerving vocal effect (digital echo?) “Stormy Monday” wraps the album up on a delicious note.

Ignoring the slapdash packaging, the murky origins of the material, and the AWOL status of one track (a cover of “Hound Dog”), this is a worthwhile package.

Postscript: A quick check suggests this album was first released a decade ago; that fact – like most all other facts – is noted nowhere on this album’s packaging.

* Postscript #2: As it happens, source info is included on the back of the one-sheet sent to reviewers. I completely missed it when I first wrote this review. Most tracks date from 1969-70; a few are from the early  70s. The suspect ones (including the Thelonious Monk tribute “Monkinit”) are — not surprisingly — listed as “date unknown. Well, okay then. I think that’s linernote-ese for “recently.”