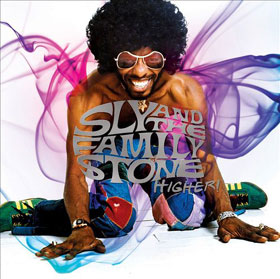 The work of Sly Stone has long called for a collection like this one. A set bringing together 77 tracks across four discs, it includes not only the obvious hits – and there were so many – but a pile of fascinating rarities and obscurities.

The rare and/or unreleased juvenilia on the first disc is perhaps the most fascinating. Right out of the gate, both sides of a very early work credited to Sly Stewart (“I Just Learned to Swim” b/w “Scat Swim”) shows that the man had talent to burn. This pair of 1964 cuts shows Stone to be both a knowing composer of then-trendy pieces (a song trumpeting another manufactured dance craze) and genre-defying excursions (the b-side, with its jazzy middle section). And while his followup single (1965’s “Buttermilk, Pt. 1”) is another in pop music’s long history of The Rolling Stones‘ “2120 South Michigan Avenue” rewrites, it does go to show – if you needed any convincing – that Stone could, even early on, excel at whatever style toward which he pointed his considerable talents. “Dance All Night” (credited to Sly and Freddie) shows Stone on a Stax-y Sam & Dave trip, with some garage rock thrown into the soul stew. The funky “Temptation Walk” (1965) is the last pre-Family Stone track, but it points the clear path toward Stone’s subsequent musical travels.

The Family Stone’s early singles (“I Ain’t Got Nobody” and a barn-burning reading of “I Can’t Turn You Loose”) show the Family Stone’s formula well established, just in time for the big hits to follow.

The singe edit of “Higher” distills an already great tune into something arguably even more potent. A half dozen or so tracks from the debut LP (November 1967’s A Whole New Thing) are followed with some true rarities, including a demo track (the instrumental “My Woman’s Head”), an alternate take of “I Get High On You” and a pair of unreleased studio cuts.

The second disc continues with the rarities: five more unreleased (or only released on other reissues) cuts from 1967. “What’s That Got to Do With Me?” finds the group heading into Aretha Frankin‘s territory. “Fortune and Fame” is a rumination on guess-what done in an unabashed gospel style. “What Would I Do” combines the two styles and is even more effective. The single version of “Dance to the Music” is another economical edit that works every bit as well as the (now) more familiar album version (not included here). Five cuts from either the original Dance to the Music LP (April 1968) or the 2007 expanded reissue fill in the blanks, bringing listeners to a clutch of single masters, powerful mono mixes and a true rarity, “Danse A La Musique” by The French Fries. The sounds-like-a-kazoo fuzztone guitar and squealing combo organ are must-hear highlights of this nominally instrumental track.

The third disc serves up another half dozen rarities, dating from 1968. The albums Life (November 1968), Stand! (April 1969) and subsequent albums get less representation on Higher!; instead the set leans more on the rarities and single masters. The presence of the latter points out that by this period, Sly & the Family Stone’s albums were pretty well designed to be taken as whole works, rather than mere collections of songs. But this set acts more like a companion to the original albums, adding the singles and ephemera to fill gaps in the story.

Because the arc of many musicians’ history generally follows a predictable path, the great pre-fame promise is followed by the hits. And those are followed by late-period, dissolute efforts. So it is with Sly Stone: the last half of Disc Four is the weakest part of the whole collection. “Can’t Strain My Brain” is pleasant enough but offers nothing new, and – worse yet – nothing that a bunch of other artists who followed in Stone’s wake hadn’t already done. But the mid 1970s, Sly Stone was no longer a trend setter. 1975’s single “Le Li Lo” is essentially a disco tune that feels like a pastiche of Stone’s early work. It’s even – shudder – slick, something that can’t be said of most of the music on Higher! (or the original albums). On the solo-credited “Family Again,” Stone began his practice of resting on – and worse, explicitly referring to – his past (it’s from a solo album called Heard Ya Missed Me, Well I’m Back; the musical contents of said LP – and subsequent releases – strongly suggested otherwise).

For its impressive packaging and cache of rarities, Higher! Is an essential addition to any serious music library. But as so often the case with career-spanning collections such as these, most listeners will treasure the first disc for its early revelations, turn slightly less often to the middle discs for their scattered-to-predominant gems, and give up largely on the last half of the fourth disc. Nonetheless, Higher! remains a must-have.

Postscript: You may also enjoy my 2011 essay In Search of Sly Stone.