Shoes are that curious breed: a powerpop band that’s consistently lauded critically, but that makes only occasional modest commercial inroads. They’ve been plying their trade – catchy, muscular, hook-filled rock with stellar vocal harmonies – since the mid-1970s. The band seemed poised for breakout fame – possibly as the Next Big Thing after The Cars – when they signed with industry heavy-hitters Elektra at the tail end of the 1970s. And while that hoped-for commercial breakthrough didn’t happen the band continued to create (rarely with outside help of any sort, it shroud be noted) an impressive body of work. With a catalog that (depending on how you count) includes more than a dozen albums of original material, Shoes kept the faith well into the mid 90s.

Things went quiet for the trio from Zion, Illinois after that, but the group didn’t disband. Beginning in 2007, Shoes reignited the flame (so to speak), first with a 2CD set of demos from their earliest days (Double Exposure), then with a solo album from guitarist Jeff Murphy (Cantilever). But none of that prepared Shoes fans for the good news that greeted them in 2012: a new album (Ignition) and much more.

I spoke at great, great length with Shoes bassist/vocalist John Murphy some twelve weeks ago about all of this. Owing to the wide-ranging nature of our conversation, it has taken me much longer than I would have liked to edit the transcript down to a manageable length. Here, over the next few days, are the highlights of our talk. – bk

Bill Kopp: So I understand there’s a book by Mary Donnelly coming out (Boys Don’t Lie: A History of Shoes). Some people would say, “Really? a huge 600-page book on a band that’s not really among the most prominent?” But I’d point them to Joe Bonomo‘s excellent book about The Fleshtones or any number of others. That said, what can you tell me about the book?

John Murphy: When Mary first contacted us – and she was a fan of Shoes since she was a kid – we had our doubts, too. But the book – which isn’t fiction, of course – is really an analogy. It’s the story of a group of guys who had this little pipe dream back in the day. Through hard work and persistence and luck (or whatever you want to call it), we managed to accomplish a certain amount of our dreams and goals. 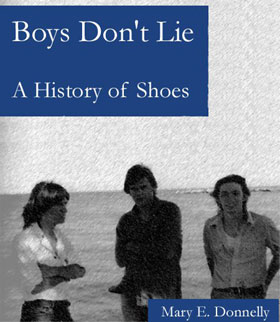 And I really think it’s an analogy for any band. Because it’s not made-up, and Mary puts the Shoes story in the context of what was happening, reflecting the time and the music industry back then. For example, we got signed at the beginning of the ’79 crash in the record industry. By the end of that year, things were going crazy. Records were shipping platinum, but getting platinum returns! In a way, we sort of scuffled our way through things, in some of the positions we found ourselves in.

So Mary’s story is a lot broader, I think, that people might expect. One could ask, “Why isn’t it a book about Coldplay or U2?” But that’s part of its appeal, I think, that’s its about a band that didn’t achieve the success – at that time – that we would have liked to. Or, the success that we were almost promised by Elektra back in the day. 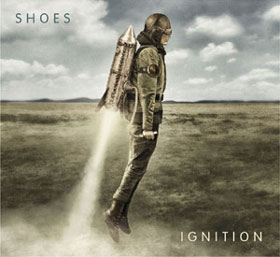 But it’s a book about pursuing your dreams. It sounds like a cliché, but it’s true. And now we joke that we’ve inadvertently given her an ending, because we have a new album (Ignition, released August 14). And it’s a happy ending.

BK: It seems that this gives her the opportunity to tell some of the history, of what was happening in the music industry, but to do it from the standpoint of a band that still exists, rather than writing it from a point of view that’s far-removed, dispassionate, scholarly.

JM: The interesting thing is, we know our side of it. But in reading it, there were pages and pages where we went, “Oh, really? Is that what happened?” We know how things happened, or how they seemed on our end. But it’s still a little miracle that the Elektra signing ever happened. And there are a whole series of events that she recounts, things leading up to that. She talked to people – the ones she could find, anyway – to get the Elektra point of view, too.

It wasn’t like we bought a raffle ticket: there was a record that we had made (1977’s self-released Black Vinyl Shoes), and it was garnering some kind of attention in independent record shops. Maxanne Sartori, an influential deejay in Boston, had a lot to do with getting The Cars signed. And that right there gave Elektra the courage to say, “Hey, we need to do this again.” They wanted to find the next Cars; that’s what was on their minds. 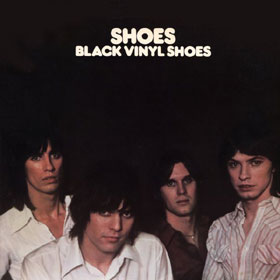 BK: All of a sudden, there’s a flurry of Shoes related activity. The new Ignition album, the upcoming book, a series of vinyl reissues from Numero, and Real Gone Music has a compilation, 35 Years: The Definitive Shoes Collection 1977-2012. Is there some sort of over-arching answer to the “Why now?” question?

JM: The Real Gone Music collection is a sort of Part Two to Shoes Best (1987). Some songs are on both. [Actually the 21-song 35 Years repeats only four songs from the 22-track Shoes Best tracks. – ed.]

As far as why now, it’s just a series of events that happened to coincide. Mary’s book started the ball rolling in terms of talk on the internet, and word of mouth. So some Shoes fans – or closet Shoes fans – who were in a position to do something, did. For example, Ken Shipley at Numero is a fan.