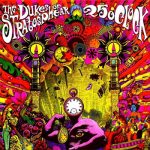 When one thinks of artists who earn well-deserved critical plaudits again and again, all the while selling records in diminishing numbers, XTC comes immediately to mind. As is so often the case from my personal perspective, the band’s middle period is its best, with the early and later material less compelling. But it’s all worth
Read More
I truly mean no disrespect to the man, but experience has taught me not to get too excited about any musical project that involves Billy Sherwood. He’s clearly a talented musician: skilled and appealing on many instruments including guitar, keyboards and drums, he’s also a fine singer, and skilled at production, engineering, songwriting and so
Read More
After a hearty hello via transatlantic telephone, Andy Partridge asks me, “so, now, are you tape recording this?” I tell him I am, asking if it’s okay. “No, I absolutely prefer it!” He explains, giving an example. “You get about twelve sentences in, and then you pause. And the interviewer taps about five or six
Read More