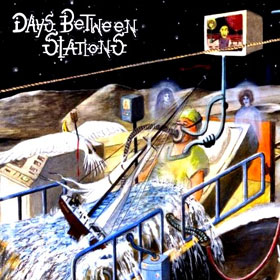 I truly mean no disrespect to the man, but experience has taught me not to get too excited about any musical project that involves Billy Sherwood. He’s clearly a talented musician: skilled and appealing on many instruments including guitar, keyboards and drums, he’s also a fine singer, and skilled at production, engineering, songwriting and so forth. And he is clearly well-respected among his peers; he’s the go-to guy for countless projects in a wide array of styles. But with all that said, neither his voice, his playing nor his songwriting move me. I don’t find those things bad in any way, but they simply don’t resonate with me. In sum: he’s good, but I often prefer other things.

Exceptions do exist. His Fusion Syndicate project is highly enjoyable. And when his vast skill set is applied to other artists’ projects, the results can be delightful for all involved. That’s the case, I’ve found, on a new album – their second – by a duo calling themselves Days Between Stations. The pair are Oscar Fuentes Bills and Sepand Samzadeh (try saying all that three times fast), backed by an all-star lineup, some of whom are clearly from Sherwood’s Rolodex. (Come to think of it, Sherwood’s Rolodex would be a great name for one of his projects.)

On this album (In Extremis) Sherwood plays drums, and contributes some lead and backing vocals. Bills plays most of the keyboards, while Samzadeh mostly plays guitar. Neither sings. Long sections of the album are instrumental, and pleasingly so. Highly melodic progressive rock – think Electric Light Orchestra in their pre-windup-toy sounding days – is the order of the day on In Extremis. Ace bassist/stick man Tony Levin lends his considerable talents to most of the tracks, and it turns out that Levin and Sherwood make a fantastic rhythm section.

Some soulful trumpet on “In Utero” is reminiscent of some of XTC‘s Oranges and Lemons, but with a more overtly prog/jazz flavor. “Visionary” features stuttering, programmed percussion, giving it a modern feel; in places, its instrumental passages are redolent of Pink Floyd‘s A Momentary Lapse of Reason.

The most notable guests on In Extremis are five-time Yes keyboardist Rick Wakeman, original Yes guitarist Peter Banks (in one of his last sessions before his passing) and rarely-heard former XTC bassist Colin Moulding (lead vocals on the album’s most overtly pop track, “The Man Who Died Two Times”). But despite the appealing vocals of Moulding and Sherwood, it’s on the instrumental sections where Days Between Stations truly shine. Moments of drama, melancholy and grandeur are peppered throughout the disc, and it’s engaging throughout. Occasionally, Sherwood’s percussion feels a bit stiff (again reminiscent of Nick Mason‘s absence from most of Floyd’s 1987 album) but it remains effective. The 21-plus minute title track throws in everything but the kitchen sink: lots of Mellotron, a trumpet solo, an orchestra, and even a barbershop quartet. For all that, it’s not overstuffed, and is easily dynamic enough to justify its epic length; in fact, it blows by amazingly quickly. Here, Sherwood’s lead vocal achieves a Peter Gabriel-like texture, with all the welcome drama that suggests.

Fans of tuneful, progressively-tinged music – think Moody Blues, Genesis or Klaatu, but without the dated trappings of a retro-minded project – will enjoy this project.