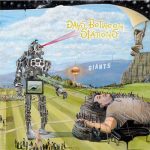 Though he’s not credited as such, Billy Sherwood’s extensive role in the making of Days Between Stations’ Giants should earn him membership in the group. Officially, DBS is Oscar Fuentes Bils and Sepand Samzadeh, but Sherwood is co-credited as arranger, producer and composer. Instead, he’s listed as a “guest artist,” alongside bassist Colin Moulding (of
Read More
I truly mean no disrespect to the man, but experience has taught me not to get too excited about any musical project that involves Billy Sherwood. He’s clearly a talented musician: skilled and appealing on many instruments including guitar, keyboards and drums, he’s also a fine singer, and skilled at production, engineering, songwriting and so
Read More