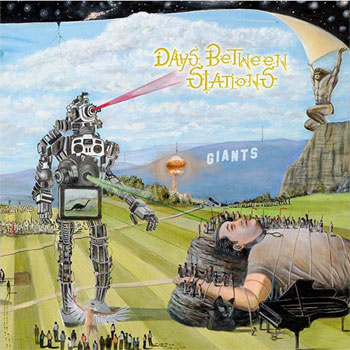 Though he’s not credited as such, Billy Sherwood’s extensive role in the making of Days Between Stations’ Giants should earn him membership in the group. Officially, DBS is Oscar Fuentes Bils and Sepand Samzadeh, but Sherwood is co-credited as arranger, producer and composer. Instead, he’s listed as a “guest artist,” alongside bassist Colin Moulding (of XTC), Durga McBroom (late-period Pink Floyd) and Inid Abiza.

Ultimately who-does-what is less important than the quality of the album overall. And it’s effective stuff: Bils and Samzadeh craft catchy melodies in a style that has clear antecedents in progressive-, space- and classic rock. That said, Giants doesn’t fit neatly into any of those arbitrary categories. For the most part (and with two notable exceptions), it’s too musically conventional to qualify as prog, too tuneful to be classified as space-rock and too interesting to be pegged with the “classic” epithet.

“Goes By Gravity” features the distinctive lead vocals of Moulding; it’s wonderful to hear him on record doing more than playing bass. Moulding has always been a top-notch songwriter; what he isn’t unfortunately, is prolific. So even though he’s lending his talents here to the work of others, it’s a welcome appearance.

The centerpieces of the album, however, are two sprawling tracks: “Spark” and “Giants.” The latter features Sherwood pon lead vocals and some very Chris Squire-ish bass work. The lea guitar passages that show up mid-song are quite enjoyable, in a very influenced-by-David-Gilmour kind of way; it’s fascinating to hear how that style meshes with the throaty, Rickenbacker bass textures. Appealing splashes of drums (Sherwood? Maybe but we can’t be sure) lead into an extended instrumental section built aorund multiple keyboard lines. The music is reminiscent of mid-period Porcupine Tree, specifically in the sense that they keyboard work is appealing but not especially notable in a technical/chops sense.

“Spark” is a complex tune that does deliver progressive sensibility. It’s an exciting, largely instrumental piece that move through a number of passages. Some of the aural textures seem a bit on the canned side, but there’s some appealing, highly distorted organ work to be found within.

An instrumental track, “The Gathering” has at its center a lovely acoustic guitar, played in a style reminiscent both of Steve Howe and Trilogy-period Greg Lake (ELP). “The Common Thread” provides some of Giants’ most rocking moments, centered on some chunky bass guitar work from Sherwood. The tune may remind some listeners of Drama-era Yes.

Again, it’s difficult to discern what exactly the Days Between Stations duo brings to the album, thanks to Sherwood’s large role and prominent presence. But if one focuses less on the credits and more upon the result, Giants is an enjoyable listen that pays dividends on repeated spins.