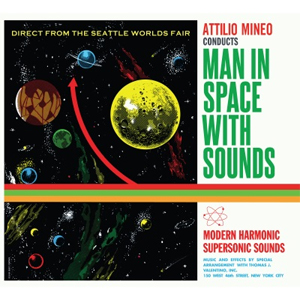 A breathlessly earnest announcer welcomes the listener to the record as a wonderfully evocative orchestra creates an instrumental backdrop meant to evoke outer space. With the help of some gee-whiz electronic studio effects – heaps of reverb, percussion that suggests a much more accessible Edgard Varese – the listener is transported to a sonic world of interstellar mystery and more than a little danger.

That’s pretty much what you get for this half-hour record, created in connection with Seattle, Washington-hosted 1962 World’s Fair (officially the event had a much more space-age, forward-looking title, the Century 21 Exposition).

Conductor Attilio “Art” Mineo leads his orchestra through a dozen passages, each of which paints a sonic picture. Sometimes the electronic elements are subtle; other times they all but hit the listener over the head. The feedback midway through the oddly titled “Gayway to Heaven” (what?) effectively evokes the feeling – accurate or not – of traveling weightless through space.

“Soaring Science” is, our announcer helpfully explains, a “realistic recreation of rocket flight.” The sounds of an actual rocket launch are followed by eerie string passages and subtle yet keening electronic squawks. Taken in the right (or wrong) frame of mind, this could be scary stuff indeed.

Back on Earth, “Mile-a-Minute Monorail” is built around instrumentation and melody that sound like a cross between a distorted harpsichord and a whirring band saw. Not the most enticing aural backdrop for a ride on the new and novel 60mph monorail serving the World’s Fair, but clever and fascinating.

A sunny, we’re-all-in-this-together mindset is at the core of “Century 21.” But once again the sounds – courtesy of primitive oscillators and synthesizers, one suspects – are equal parts thrilling and unsettling. Little stabs of organ and plinking tuned percussion alternately darken and lighten the mood.

If British producer Joe Meek had a decent budget and more musical talent, he might have created something like Man in Space with Sounds (He did give us “Telstar,” after all). While liner notes author Björn Werkmann doesn’t mention Meek in his essay that accompanies the CD, he takes such a straight-faced approach to the music that it’s near impossible to tell if he’s serious or putting us on. And that’s half the fun of his essay, which includes helpful cautions such as this one: “But make no mistake: Man in Space with Sounds is not for the faint of Heart.”

The monaural recording is superbly sharp and clear; other than the production aesthetic, there’s little about the record that suggests it wasn’t recorded with 21st century equipment. The lack of a stereo mix isn’t a detriment, so full is the aural landscape on the album.

Like another recent reissue from Modern Harmonics – the thematically similar Space Songs, reviewed separately – Man in Space with Sounds is most assuredly a curio. But it’s one that holds up on repeated listenings. Very much of its time – and valuable in large part for that very reason – Man in Space with Sounds is a fun trip not only through space, but back in time.