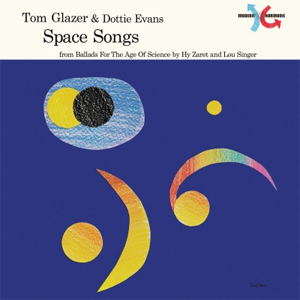 This curio from 1961 was originally created to serve as an instructional record for children. The word that immediately comes to mind when hearing the vocals and instrumentation is “ginchy.” And while I’ll readily concede that “ginchy” is not a real word, it somehow seems to encapsulate the vibe of Space Songs.

It’s easy enough to conjure a mental image of Tom Glazer and Dottie Evans when listening to the record. Tom has a neat gray flannel suit, tortoise shell glasses, Brylcreamed hair, and probably a pipe. Dottie has a simple white or off-white dress, probably a modest pearl necklace. They’re both white. Really white, in fact. But they’re nice, wholesome, well-meaning folks, and they’re here to teach.

Bits of spoken word – mostly by Glazer; this was 1961, after all – serve as intro/bumpers for most of the songs. Glazer provides some basic contextual information about the topic at hand – helpfully defined by each song’s title – and then he and Evans launch into song. “Constellation Jig” is a wonderfully descriptive title: the music is a sprightly jig, and the lyrics list some of the more well-known constellations visible in Earth’s nighttime sky: Sagittarius, etc.

Technology gets some time as well, via cute little tunes like “Beep Beep (Here Comes the Satellite).” It’s worth remembering that – Cold War notwithstanding – in 1961, the United States was in a largely optimistic frame of mind, and science was viewed as a force for good. Against that backdrop, which is embodied in many of these tunes, it’s more than a little sad that in 2017 we’re living in a society led – for the moment, at least – by climate science deniers and traffickers in “alternate facts.”

Real facts are at the heart of “Why Does the Sun Shine? – The Sun is a Mass of Incandescent Gas.” Tell that to the four percent of Americans who are unaware that the Earth revolves around the Sun. Clearly they didn’t listen to Space Songs. As Glazer and Evans guilelessly intone, “It’s a Scientific Fact.”

Everything about Space Songs conveys a kind of charming innocence. But there’s a nicely world-music (1961 edition) to many of the songs; that’s a clearly Parisian vibe to “Longitude and Latitude,” set to the tune of childhood favorite “Did You Ever See a Lassie?” But the kids of ’61 could trill along to the tune and learn about the Prime Meridian and other useful bits of information.

Musically, the most interesting tune is the opener, “Zoom a Little Zoom (Rocket Ship).” Glazer and Evans chirp away in perfect harmony as they sing, “Soon we’ll see if the moon is made out of green cheese ha ha ha.” How can you not love that? The musicians aren’t credited beyond a note that the music is played by the Tony Mottola Orchestra, but whomever is playing is doing a swell job.

Sundazed Records associated label Modern Harmonic has reissued this odd little record, recorded in 1959 and originally part of a series called “Singing Science Records.” The vinyl is translucent red. Casting a (shall we say) very wide conceptual net, this release can be viewed as part of a collection of other related items including a Sun Ra Arkestra 2CD live set (At Inter-Media Arts 1991), and the instrumental gem Attilio Mineo Conducts Man in Space with Sounds, originally released in conjunction with the 1962 World’s Fair in Seattle, Washington. I’ll cover each of those Modern Harmonic reissue titles in separate reviews.