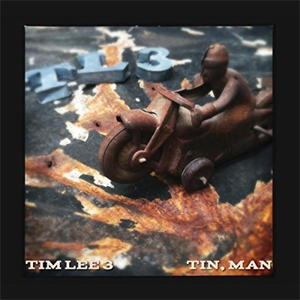 File next to: The Blasters, X, Long Ryders

TimLee3 is the band started by former Windbreakers guitarist and his bass-playing wife, Susan Bauer Lee. Last year’s 33-1/3 was another excellent twangified take on power pop, and the trio’s fifth album Tin, Man is every bit as good. But simultaneous with the release of this 11-track disc came news that – after a critically (if not commercially) successful 10-year run – the Knoxville, TN-based TimLee3 would be going on indefinite hiatus. The good news is that their final album finds TimLee3 going out on a high note; the songs and playing are as solid as ever. The album’s amped-up approach (with little of the Windbreakers’ Byrdsy jangle) showcases husband-and-wife vocal arrangements that call to mind John Doe and Exene Cervenka at their best. While TimLee3 will be missed, here’s to seeing what they come up with next.