Album Review: Nektar – Journey to the Centre of the Eye 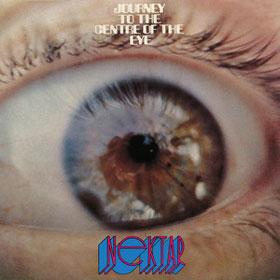 The history of 1970s rock is littered with also-rans. Even though the pop music landscape of that decade was arguably more varied than today’s (and by “pop” I mean music that could be easily found and heard by the average consumer), the marketplace was dominated by some high-profile acts. And the success of those artists – Led Zeppelin, Pink Floyd, Fleetwood Mac, Elton John and a relatively short list of others – meant that any number of worthy artists were, in effect, crowded out.

As a result, some really good music went unheard, relatively unnoticed. Among these was the catalog of Nektar.

It certainly didn’t help that Nektar – a British band, through and through – was based in Germany. Most pop music fans would be hard-pressed to name more than one or two German exports that enjoyed any measure of success on the pop charts in the USA. And distribution issues meant that Nektar’s albums weren’t as easy to find in record bins of the day; it was only in the later 70s (a time by which the group’s music was still good, but less interesting) that Nektar LPs could be found without great effort.

In 2011, a small boutique label called It’s About Music released the group’s second LP, 1971’s A Tab in the Ocean on CD, paired with some previously-unreleased sessions dating from a time before they had a proper deal. Those early demos show a band poised to head in a musical direction quite different from the space-rock one they’d soon pursue. 1973’s Remember the Future was also reissued by the label in 2011, and its approach set the template for (ahem…) future Nektar reissues. The first disc presented the original album remastered, and the second disc showcased the group performing live. For Remember the Future, the live set dated from 2007, though.

Now seeing its catalogue handled by Purple Pyramid, Nektar’s debut album Journey to the Centre of the Eye is getting the reissue treatment. While Remember the Future is an exciting, varied and engaging listen, it’s the group’s debut that represents their finest achievement. Journey to the Centre of the Eye is a unified work, designed – per the times – to be listened start to finish. The entire album flows, one song into the next, and it’s quite likely that any given piece removed from its context would lose much of its power and effect. The sum of the parts truly is greater than the whole here, but it’s clearly by design.

One could argue that Nektar’s work on Journey is a few notches below the quality of, say, Pink Floyd. But if one wishes to make such a comparison, it’s only fair to hold Journey to the Centre of the Eye up against what the Floyd did at that specific time: 1971. And while Meddle is a landmark album, the Pink Floyd epic “Echoes” is only half of it: the other songs are an assorted lot. Nektar, on the other hand, was crafting a cohesive start-to-finish work two years before Pink Floyd did the same with The Dark Side of the Moon.

There are occasional flashes of down-and-dirty rock, like the didn’t-see-that-coming Bowie-esque riffage on “Burn Out My Eyes.” And while the music isn’t especially derivative, Roye Albrighton‘s guitar figures on “The Dwarf Nebula” are very reminiscent of “Tattoo” from The Who Sell Out (1967).

Recurring musical motifs crop up time and again throughout the work; some demented guitar solos — again, most notably on “Burn Out My Eyes” — but in plenty of other places as well — are layered atop a pounding, insistent prog riff. Lots of Albrighton’s nicely textured, effects-laden guitar work contrasts with soaring, ominous Mellotron work from either Allan “Taff” Freeman or Derek “Mo” Moore (both are credited on the mighty ‘Tron).

The second disc presents an “official bootleg” recording of the entire work live onstage in Germany in November 1971. Dodgy fidelity notwithstanding, it shows that Nektar was more than capable of translating the thrilling dynamics of Journey to the Centre of the Eye to the concert stage. The packaging includes a nice essay from Dave Thompson, but no information about the live recording. Track listings and so forth are also absent from the booklet; instead we’re left with a reproduction of the orignal album artwork; thanks to type size, reproduction quality and color contrast, it’s near impossible to read the track names and brief descriptions.

An oft-overlooked exemplar of space-rock, Nektar’s Journey to the Centre of the Eye is a must-hear for fans of the genre, and the new 2CD set with the bonus live set is the easiest way to hear it. It’s worth noting that – due to to the relative rarity of the set – you’ll likely pay less for the expanded 2CD set than you would for a 40-plus year old vinyl copy, assuming you could lay hands on one.