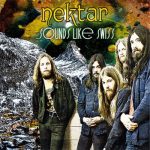 Nektar was one of those bands that got lost in a sea of great music. Though they were British, being based in Germany certainly didn’t help gain them exposure in places like the U.S. So despite the high quality of their music – especially on albums like 1971’s Journey to the Center of the Eye,
Read More
In 2013, there aren’t all that many bands making progressive rock of the sort that walked the Earth in the first half of the 1970s. But while the popular thinking is that punk killed off prog, that simply didn’t happen: it merely went back to being a slightly underground movement – as did punk, really
Read More
Album reissues can be funny things. Not haha-funny, but perplexing-funny. Take, for example, the case of Nektar’s breakthrough 1973 LP Remember the Future. Their most commercially successful album, it ranks among their best and was released amidst a string of creative high-water-mark albums. It reached #19 on the Billboard album charts, and is a good
Read More
The history of 1970s rock is littered with also-rans. Even though the pop music landscape of that decade was arguably more varied than today’s (and by “pop” I mean music that could be easily found and heard by the average consumer), the marketplace was dominated by some high-profile acts. And the success of those artists
Read More
Here’s another installment in my occasional series of capsule reviews, this time covering new reissues and compilations. My self-imposed limit for this particular exercise is 150 words on each album. Nektar – Man in the Moon / Evolution Nektar is one of those mildly progressive yet accessible 70s bands that never broke through big time
Read More
Having come of age in the 1970s, I was familiar with Nektar – the band name, not the music itself – by two means. First, three-inch-square reproductions of their back catalogue items were often reproduced on vinyl inner sleeves, in those “you may also enjoy” ads of the era. And the records themselves I saw
Read More