Album Review: Nektar – A Tab in the Ocean 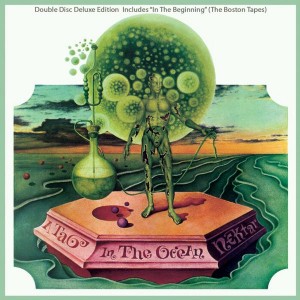 Having come of age in the 1970s, I was familiar with Nektar – the band name, not the music itself – by two means. First, three-inch-square reproductions of their back catalogue items were often reproduced on vinyl inner sleeves, in those “you may also enjoy” ads of the era. And the records themselves I saw on nearly every visit – and there were many – to local record shops. Nektar albums were in ample supply…in the cutout bins.

In those days I was never overly curious about them; the album art — to the extent that it made any impression upon me – telegraphed hey-we’re-a-prog-band in no uncertain terms. But the spelling of their name suggested they were, I dunno, foreign. German, maybe. I had heard Gong and found them deeply boring and repetitive. France is near Germany, and they also don’t speak English, I told myself. So instead I picked up a Nick Lowe LP, or maybe The Who By Numbers.

Fast forward to present day. The boutique/archival label It’s About Music is re-releasing Nektar albums and filling them to the brim with bonus tracks. So it’s time, finally, for a listen to Nektar. And by the way, they weren’t German, but they almost were: while Nektar was a quartet of English blokes, they were headquartered in Germany, and it was there that they enjoyed most of their success.

In keeping with those heady days of the early 70s, the band titled their second long player A Tab in the Ocean. Comprising but four tracks, the album is an exemplar of what we might call meat-n-potatoes prog. The long tracks wind through distinct movements; stabbing organ is omnipresent; the percussion features bits of syncopation, and there’s some sort of lyrical theme throughout. But A Tab in the Ocean isn’t terribly ambitious musically. Each of the tracks features a few – very few, in fact – musical ideas, and said ideas are stretched across the length of each one.

Throughout A Tab in the Ocean, this group of UK expats manages again and again to sound German; perhaps it’s the repetitive, relatively simple musical themes. Maybe it’s the aiming-for-dramatic arrangements. But to these ears they sound infinitely more like Grobschnitt than, say, Yes. The musicians are accomplished, but if they’re virtuosos, they’re shy about displaying their skills.

The tracks get progressively shorter as the disc unfolds. “Desolation Valley/ Waves” is built around a very Pink Floyd (circa 1971) sounding organ part. But where the Floyd visited multiple interesting places in their songs (see “Embryo” or a live bootleg version of “Cymbaline”), Nektar comes up with one or two cool ideas and settles for those.

On “Crying in the Dark” Nektar moves closer to straightforward second-tier heavy 70s rock, not unlike Foghat, Head East or Kansas. Subtle touches of the prog aesthetic appear briefly, but they’re not pursued. “King of Twilight” is the closest thing to what 70s progressive rock enthusiasts might be looking for. A martial drum part (by way of Gustav Holst’s “Mars, the Bringer of War” – how’s that for a well-worn/worn-out influence?) roots a song that does feature some interesting vocal harmonies.

In total, A Tab in the Ocean is worth a listen, but it doesn’t rank among the great undiscovered works of its era.

But here’s the thing: there’s this bonus disc. Subtitled “In the Beginning (The Boston Tapes),” it’s worth the price of admission all on its own. Recorded stateside in 1970 – notably, before sessions for their first album as Nektar – the set finds the band turning out a decidedly non-prog sound. Closer in many ways to Derek & the Dominoes or Beck, Bogert & Appice, songs like “Our Love Will Last Forever” are exemplars of sturdy, early 70s rock with a pop sensibility.

“Do You Believe in Magic” (not the Lovin’ Spoonful hit) sounds a bit like Marmalade and other acts from the ambitious end of the late-60s UK pop spectrum. “Candlelight” features Deep Purple-styled organ and fiery guitar work of the sort mysteriously absent from A Tab in the Ocean. The mid-section of “Gooday” suggests that the band might have been spinning Joe Cocker’s cover/reinvention of the Beatles’ “With a Little Help From My Friends.” And the intertwining lead guitar on that track suggest an approach not wholly dissimilar to the Allman Brothers. But the disc’s highlight is the powerhouse “The Life I’ve Been Leading;” it hints at a direction the band might have pursued, one quite different from the path they actually chose.

There’s a sweeping, almost gospel feel to some of the songs. Even though the sessions were captured on a relatively primitive (8-track) recording console, they’re full of texture. The songs, the performances, the playing…they’re all superior in almost every way to the sorta-prog style Nektar would soon adopt.

Apparently the band thought so as well. After A Tab in the Ocean, their next effort (1973’s …Sounds Like This) resurrected three of the “Boston Tapes” songs in re-recorded versions. Thanks to inclusion of this bonus disc of previously unavailable material — which can lay some claim to the title “great lost album” —  A Tab in the Ocean is – somewhat surprisingly – recommended.