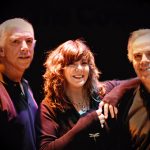 As a band, the Cowsills formed in 1965. But they can make a credible claim to having been together much earlier. A self-contained group made up completely of family members – five brothers, a sister and their mom – the real-life Cowsills were the inspiration for the popular TV series The Partridge Family. All 5
Read More
Continued from Part One… Bill Kopp: I was ten when the film came out, and even though Dirty Duck was a cartoon, I wasn’t allowed to see that one. It got an X rating… Mark Volman: Right! “Livin’ in the Jungle” came from that, and several others. “Get Away,” “This Could Be the Day,” an
Read More
The Turtles – Mark Volman and Howard Kaylan, aka Flo & Eddie – have worked tirelessly to regain the rights and control over their catalog; the latest fruit of their labor is a new 7-record box set containing 45rpm records. I spoke to Mark about that set, their larger plans of a vinyl reissue program,
Read More
Continued from Part Two… Bill Kopp: One area you didn’t spend a lot of time on was the studio sessions. You didn’t avoid them, for sure, but neither did you get into deep detail about the recording. Howard Kaylan: That’s the most boring shit in the world! I can tell you, but it doesn’t matter.
Read More
Continued from Part One… Bill Kopp: I’ve read a lot of Jeff Tamarkin‘s work, and I’ve had a long conversation with you. So one of the things that impressed me about Shell Shocked is how perfectly it reflects what I expect to be your “voice.” He’s essentially invisible, which I’m sure was the plan. Can
Read More
Autobiography or no, Howard Kaylan is an engaging, colorful character. His life story is full of highs and lows, but his highs and lows were set against the backdrop of being on one of the 1960s more popular bands (The Turtles) and then as part of the mad ensemble known as Frank Zappa‘s Mothers. In
Read More
In my last entry I covered the new 180-gram vinyl monaural reissue of The Turtles‘ debut LP, It Ain’t Me, Babe. Released in tandem in 2013 on their own FloEdCo imprint was their third album. Eighteen months after It Ain’t Me, Babe (we’re skipping their 1966 LP You Baby, as it hasn’t been re-released on
Read More
A few weeks ago, I had the honor and pleasure of interviewing Howard Kaylan. For the second time, as it happens. The first was a few years ago in connection with the film My Dinner With Jimi, based on his experiences in The Turtles. This most recent conversation – soon to be a feature here
Read More
Howard Kaylan is best known as the lead singer of 60s pop group the Turtles. That group chalked up an impressive string of hit singles including “Happy Together,” She’d Rather Be With Me” and “Elenore.” And they released several albums, including at least one absolute classic, the acerbic parody-concept LP The Turtles Present the Battle
Read More
This evening I had the honor and pleasure to speak at great length with Howard Kaylan. Known to some as “Eddie” (as in, Flo and Eddie), vocalist for FZ’s Mothers, known to many others as the lead singer for the Turtles, Howard is also the screenwriter of a lovely new film — just out on
Read More