Bill Kopp: One area you didn’t spend a lot of time on was the studio sessions. You didn’t avoid them, for sure, but neither did you get into deep detail about the recording. 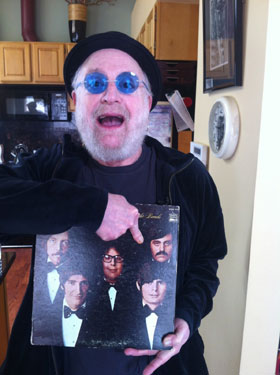 Howard Kaylan: That’s the most boring shit in the world! I can tell you, but it doesn’t matter. To the reader, it’s news to them. And they don’t give a shit about it.

For instance, I can tell them – and I tried to, a little bit – but I don’t know anything about microphones, whether I’m singing into a Sennheiser or a Neumann. And nobody gives a flying fuck. This is not a music book, in those respects. Not at all. Do you really want to know the difference between a fifteen-hour Roy Thomas Baker session and a one-hour Todd Rundgren session? Do you really?

There was actually a whole bunch of that crap in the later chapters, because I was trying to amalgamate the 80s into a chapter, the 90s into a chapter. It wound up being cursory name dropping; it sounded like a list of people that I knew, and it was just stupid: “I went over to Ray Manzarek‘s house…” Well, who the fuck cares?! And so Jeff was like, “We’ve got to lose sixty pages; where do you want to lose ’em?” So I said, “Let’s cut out the shit that we don’t need. How about that?”

BK: Technology has fundamentally changed the way that artists interact with fans. I’d suggest that the internet allows a kind of interchange with fans that doesn’t require a followup visit to the doctor for a penicillin shot. We’ve gone from fan clubs and groupies to Facebook. You and Mark Volman have always been, I think, more accessible than a lot of artists thanks to your radio shows and so forth, but I’m interested to know your thoughts on the kind of communication you have with fans, admirers, and fellow musicians on Facebook and social media.

HK: I like to think it’s pretty good. For instance, I was running a campaign before the summer tour where I told people that if they sent me their copies of Shell Shocked, I would sign them and send them back. All I wanted from them was a self-addressed stamped envelope, the book, and the postage. And I told them what the postage would be in every area of the globe. I got a Post Office box, and waited for the copies to come in.

And you can’t believe the stuff that I received. It’s been amazing: not only have I gotten hundreds and hundreds and hundreds of books to sign (which is great), but among all the great people out there, there are some that still just don’t get it. I had a guy send me a postal-card size envelope with $8 in stamps on it. I went back on to Facebook after a couple weeks and said, “Guys! I can’t buy your postage. I’m losing money on this. I’m trying to be a nice guy. But if it’s gonna cost me six dollars plus an envelope to send this shit out to you – when it’s Amazon discounted I see only $3 on each book – then I’m losing triple. What are you doing? Please!”

So once I shut that happy little campaign down, I think the only interaction is going to be Facebook and Twitter for this guy.

BK: I saw that post in which you wrote, basically, “Don’t send me other stuff. If you don’t send correct postage, I’m keeping the book.”

HK: See, you got the joke, and you laughed. But if you saw the comments that followed, you know that many people didn’t.

BK: Right. So I commented, asking if it was okay to send eight dollars in loose pennies.