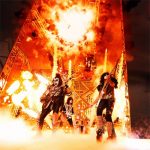 I recently interviewed KISS’ frontman and guitarist Paul Stanley for a short print feature that appeared in the Colorado Springs Independent. The whole interview was interesting, so here’s the full transcript. – bk Bill Kopp: After all your years of touring, this current KISS tour will bring you to some cities where you’ve never played.
Read More