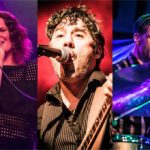 Note: This feature previewed a November 2017 concert in Asheville NC. Jeff Santiago’s band released its most recent album, Rolling Towards the Moon, in April 2014. Since that time the group has shortened its name to Los Gatos and begun writing for a follow-up album. But the Asheville group’s period of low-profile activity is coming
Read More