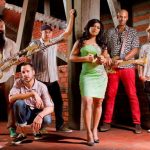 Music historians often observe that the Beatles-led, so-called British Invasion was an example of British musicians absorbing American influences, and then serving that music back to Americans. In a sense, […]
Read More
The band Dengue Fever has been together for about twelve years; prior to their latest album, they’ve released six full-lenth albums (including a film soundtrack) and three EPs. But somehow […]
Read More