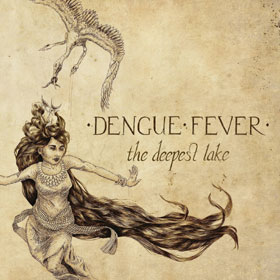 The band Dengue Fever has been together for about twelve years; prior to their latest album, they’ve released six full-lenth albums (including a film soundtrack) and three EPs. But somehow I’ve missed them until now. My only prior exposure to the group was via their curating a 2010 compilation called Dengue Fever Presents Electric Cambodia. In my measured review, I put across the reaction that the disc was a bit exotic for my tastes. And my tempered enthusiasm for it stuck with me, making me (by extension) less receptive to music from Los Angeles-based Dengue Fever.

The loss was clearly mine, as I discovered when I gave the band’s latest, The Deepest Lake, a spin. Where the tracks on the 2010 compilation betrayed miniscule or nonexistent recording budgets and a musical sensibility somewhat alien to western ears, the music of Dengue Fever bears none of those characteristics.

Sure, it leans in a decidedly “world music” direction, but Dengue Fever’s music is firmly rooted in western styles – most notably (but by no means exclusively) sixties garage and psychedelic rock – with a pan-global sensibility folded into the music.

Right out of the gate, Dengue Fever employs an approach that seamlessly blends east and west: on “Tokay,” drum machines chug along right alongside “real” percussion by Paul Dreux Smith, and a southeast Asian-flavored melodic line is delivered using western instruments like Ethan Holtzman‘s venerable combo organ and synthesizer. Lead vocalist Chhom Nimol sings in an unfamiliar language (Khmer), but Zac Holtzman delivers some delightfully reverberated spaghetti-western electric guitar. The result is exotic and familiar all at once, and quite hypnotic. We don’t know what Nimol is singing about, but we like it.

“No Sudden Moves” is, if anything, an even more successful hybrid of Asian and western textures; David Ralicke‘s soulful horns nudge the group’s sound in the direction of bands like New Mastersounds and DC Fontana, and Zac Holtzman’s surf-n-spy guitar licks. But Nimol’s delightful, expressive and high-register Khmer vocals take the music other places indeed.

For “Rom Say Sok,” Nimol not only sings in English, but the band adds in backing harmony vocals; the result sounds not unlike X crossed with the go-go-dance aesthetic of The B-52’s, with some ultra-cool guitar and synth work layered on top. As good as the first two tracks are, with “Rom Say Sok,” The Deepest Lake really hits its stride. And Ralicke’s horn charts on the cut are thrilling.

“The Ghost Voice” dials back the energy, creating a gentle, swaying ambience. Nimol returns to singing in Khmer, and the stuttering beat of the tune – lots of cowbell – will draw listeners in. But everyone in the band contributes something interesting and valuable, so picking the song apart in one’s head yields further delights. That it all works together smoothly – that it’s not some sort of gruesome or precious hybrid – is a testament to Dengue Fever’s skill at songwriting and (especially) arrangement. (Composition of all of the band’s music is credited to the full band.)

“The Deepest Lake on the Planet” weds western ba-ba-ba vocals (from the Mamas & the Papas / Turtles school of pop) to a spooky, slinky melody with a dreamy Khmer vocal from Nimol. One could imagine the band playing this in some smoky Cambodian bar while a tuxedoed James Bond sips on a vesper nearby. “Cardboard Castles” continues in that vein, adding some appealingly twangy lead guitar licks throughout. Here, Nimol alternates effortlessly between Khmer and English.

I’m not sure if it’s a real or sampled flute that opens “Vacant Lot,” but whichever it is, the effect is lovely. Because of the Khmer vocals (and lack of a lyric sheet), it’s impossible to know for sure, but one can’t help wonder if Dengue Fever’s songs on The Deepest Lake concern themselves with melancholic and poignant subject matter; some of the titles certainly suggest it’s the case. The music on “Vacant Lot” and many of the album’s nine other tracks delivers beauty and sadness in equal parts.

The upbeat “Still Waters Run Deep” uses Nimol’s vocal lines as a musical instrument; the Memphis-styled horn battle that provides the song’s centerpiece is easily the most exciting musical moment on an already highly engaging album. “Taxi Dancer” is one of the few tracks on The Deepest Lake in which male (backing) vocals can be heard clearly; the English-language response to Nimol’s Khmer call is a bit unexpected, but it works.

Listeners who are open to an album featuring little in the way of English-language vocals are strongly encouraged to give Dengue Fever’s The Deepest Lake a spin; the alluring performances and strong melodies will win over the open-minded.