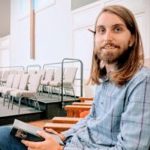 Blaine Russell and wife Christina joined the staff of Fletcher United Methodist Church in 2013. Blaine is Music Director and Christina’s duties include her role as Children’s Music Director. Both have Bachelor’s degrees in voice and Master’s degrees in church music. Blaine’s approach to the music program at Fletcher UMC balances respect for tradition with
Read More
Onward Christian soldiers! War of Ages’ latest offering, Fire from the Tomb may be the worst thing I have ever heard, and that’s saying a lot (I saw Styx on the Kilroy Was Here tour). Standard-issue metalcore riffs of the “look-ma-how-fast-I-can-play” variety, coupled with a punishing bass/drum assault equal…well, not much. The bowels-of-Hell vocals are
Read More
The debut full-length from this trio is tightly and expertly played, passionately sung, flawlessly produced…and boring as hell. There’s not a single thing here we haven’t heard a hundred times before. And most of those hundred times have been in the last 36 months. Bandwagon riders all. State of Nature sports a soupçon of screaming,
Read More
As a card-carrying Pastafarian, I pray every day to the Flying Spaghetti Monster that I am delivered from the random assignment of reviewing Christian hardcore CDs. I simply don’t get how these angry white boys (who in every other aspect look and sound like other barely-worth-merit-of-a-mention bands in the hardcore-without-a-“godgenda” subgenre) manage to keep cranking
Read More