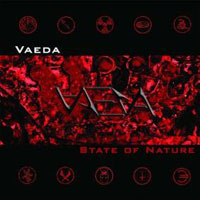 The debut full-length from this trio is tightly and expertly played, passionately sung, flawlessly produced…and boring as hell.

There’s not a single thing here we haven’t heard a hundred times before. And most of those hundred times have been in the last 36 months. Bandwagon riders all. State of Nature sports a soupçon of screaming, a healthy helping of chunk-chunka Metallica riffing, high harmonies. Thing is, there’s nothing unique in the presentation. One surmises that they’re better live than on disc (assuming one actually likes this sort of thing) but as a listening experience, State of Nature leaves this listener cold. The twelve tracks tumble into one another, leaving no impression once they’ve finished. Well, one impression: at times, vocalist Ian Cole sounds like Billy Squier.

A few of the song titles suggest that maybe — just maybe — Vaeda are trying to sneak some Christian messages into the heads of the teenagers who’d consume their product. The titles “All for You,” “Battle Song,” “Jesus Rides the Subway,” and “Son of the Viper” suggest that Vaeda is gearing up for some sort of Left Behind-styled epic battle between good and evil. Were that true, at least it would provide some comic relief.

Perhaps the great rock critic W. Shakespeare was thinking of Vaeda when he wrote of a tale “full of sound and fury, signifying nothing.” That about nails it. The best thing to be said about State of Nature is that it’s not a double album. Wake me when it’s over.