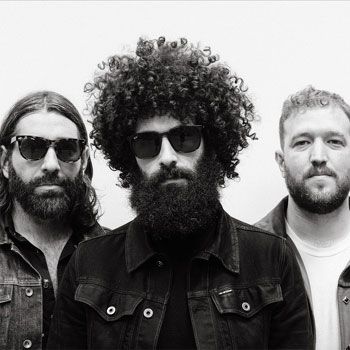 GA-20 takes one of the blues’ traditional configurations, plants one foot firmly in the Chicago style, and moves forward from there. Guitarists Matthew Stubbs and Pat Faherty (plus drummer Tim Carman) balance reverence with adventurousness on Crackdown, their third album [reviewed here]. Stubbs spoke with me about where GA-20 came from and where it’s headed.

What led you to the “two guitars / drums / no bass” setup?

When this idea came up, Pat [Faherty] and I thought, “Let’s keep it as simple as possible.” When it really first started, we weren’t writing songs. We were just playing the ‘50s Chicago blues that we love, and I was like, “Let’s just use different drummers and keep it loose.”

A lot of records that we liked didn’t have bass players: Hound Dog Taylor, a lot of Little Walter stuff. At first, it seemed like a lot of the listeners or fans didn’t realize that that historically was kind of a thing that blues players did. Then, when we arranged songs in that fashion, we kind of developed our sound. We figured out how to “weave,” because we both solo, and both play the low end.

So that’s how it started, and we never changed. Any time we have a bass player sit in now, it feels kind of weird. You would think it would sound bigger and fuller, but a lot of times it seems like it gets in the way.

You’ve been playing with Charlie Musselwhite for 14 years now. What are some of the biggest takeaways from that experience?

I’m just lucky. If I only got to ever play with him once, I would feel lucky. He’s one of the last bridges to all those guys that I listened to but never got to see, and he has multiple stories from all those. To hear these stories of Charlie hanging out in Chicago or being on the road with these guys that are legendary to me, that’s the biggest takeaway. I’ve been in vans and airplanes and traveled the world with the guy for so long, and he always has a new story.

GA-20’s first record, Lonely Soul includes some blues classics. Did you find it daunting to write original songs that would be compatible with those?

No. When we wrote those songs, we weren’t even thinking about making a record. We were just doing local gigs around Boston – wine bars and backyard parties – and Pat and I were listening to a lot of ‘50s Chicago blues, so [those songs] just kind of came out. Sometimes, when people sing blues, they put on a voice. But Pat’s not putting on a voice. That’s just his talking voice.

I think the trickier part was the production side. Basically, we set up live in a room, we didn’t isolate anything or do overdubs. We just performed the songs like all the old blues records I love. Lonely Soul and Crackdown were done at a very expensive, awesome studio, but we took advantage of the microphones, and we have a lot of old gear. Really, it was just the sound of the room.

Your second album was GA-20 Does Hound Dog Taylor: Try It…You Might Like It! Tell me why Taylor is such an important musical touchstone for you.

I always liked Hound Dog’s music; I always connected with it, because it was so raw and off the rails, and I know Pat feels the same way. Hound Dog is almost like a punk rock band playing blues.

In July of 2020, Bruce [Iglauer] at Alligator sent me an email. He had just seen the band in Chicago before the shutdown and liked us and wanted to put out a GA-20 record, but we were already under contract with Colemine Records. It was going to be the 50th anniversary of Hound Dog’s record at Alligator, and I didn’t want to pass up the opportunity to work with Alligator, so I cooked up the idea of the album. I pitched Bruce and our label, and it took a minute to figure out all the details, how two labels were going to release us together.

We’re always compared to Hound Dog and the HouseRockers, because it’s two guitars and drums. The only missing link was that neither of us played a lot of slide guitar at that time. So once [the album] was going to happen, I called Pat and said, “I’ve got to do all this other stuff with the label. You’ve got to learn how to play slide in a couple months.” And he did!

And then after that you made Crackdown…?

Crackdown was actually the follow up record for Lonely Soul. It was recorded before the Hound Dog record. We were going to release it, but then [with the pandemic] everything shut down. We didn’t want to release it and not know when we were going to be able to tour and do press to support it, so we were like, “We’ll just wait.”

When some people make an album, it’s essentially the best of the most recent ten or so songs that they’ve written. Crackdown feels like there’s something more to it than that.

When Lonely Soul came out, we were already working on a lot of these songs and playing them live. My idea for Crackdown was to take the spirit of Lonely Soul – which was really kind of a blown out, distorted- sounding ‘50s record – and then move it a little bit forward. There’s some garage rock stuff in there, there’s definitely some country music that snuck in there, and rock and roll.

And I tried to move the production along a little bit. I don’t want to make the same record every time, you know? I just think it’s growth from that first record and still trying to be a blues band. We’ve had lots of people tell us, “Just don’t call it blues. Call it rock and roll. It’d be easier to sell it.” We’re not doing that. GA-20 is about keeping a blues band and allowing influences in there, but still we are a traditional blues band.