Bruce Iglauer: Alligator at 50 (Part One) 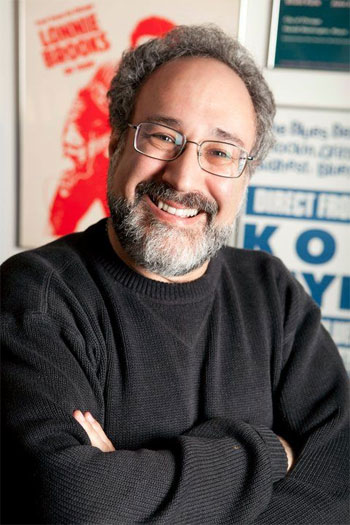 One of Living Blues’ founders, last year Bruce Iglauer celebrated the 50th anniversary of his Chicago-based label, Alligator Records. The acclaimed label commemorated the occasion with a new 3CD compilation, fittingly enough titled 50 Years of Genuine Houserockin’ Music. I chatted with Bruce just ahead of the album’s release date.

Your full-page “letter from Bruce” has been a longtime fixture in the pages of Living Blues. What inspired you to take that approach?
It was suggested to me by my first full-time employee, Richard McLeese. This would probably be about 1977, ’78, maybe a little earlier. He said, “People want to know that there’s a human being behind the label, that an individual’s passion and love for the music and the artist has caused this record to be recorded.” So he suggested that I write a letter telling people about the new releases.

As a writer, I’m the opposite of short-winded; I tend to go into a fair amount of detail, so I don’t expect that I’m ever going to get caught up. So it’s all going to be partly what we’re doing now and partly history, mixed together. I didn’t intend to make myself into any kind of a blues celebrity; that’s for the artists. But certainly, as compared to anybody else who’s produced blues recordings at any other label, I have made myself a little more visible. Ultimately, it’s all in the service to the artists and the records.

Alligator Records is notable for a lot of things; one of them is being an independent label. Over the years, how often have you been approached by the majors, and how did you respond?
Well, I was approached more so during the ’80s and ’90s when there was more interest around blues, probably because of the popularity of Stevie Ray Vaughan. I had a couple of serious offers at that time, and I actually went to California and had a meeting at A&M with some very nice people. But I realized that they were looking for me to discover the next Stevie Ray. What they weren’t thinking about was the catalog. They weren’t thinking about the value of having Big Walter Horton’s records.

At any rate, you know, I finally said, “No,” because I thought the chances were good that if I didn’t sign the next Stevie Ray Vaughan, it would all just turn to dust. Interestingly, I believe that within two years, every single person I met with had left A&M.

Tell me about the importance of independent record stores from Alligator’s point of view.
The very best friends Alligator has had are independent record stores. I worked at the Jazz Record Mart for Bob Koester, my mentor and hero. I still walk in his shadow. I remember what it was like when a regular customer came in, and I thought, “I know something he or she is going to like,” so I’d put it on the turntable. People would come over and ask, “What’s that? I want to buy that!” So, there was all of that discovery experience going on.

In addition, I remember when I was a teenager, and I would spend hours in record stores reading liner notes trying to figure out where I was going to spend $5 for one LP and the record store experience. They called them “Mom and Pop stores,” but the reality is that what they were was stores run by people who were absolutely dedicated to music.

What do you see as the good and bad qualities of the streaming phenomenon?
The negative part of streaming is this tiny amount of money we make per stream which always starts with a decimal point and two zeros. Typically, the next figure is either a two or a three. So, it’s literally fractions of pennies.

But here’s the good part: In the past, when we were selling physical products – or even when we were selling downloads or selling to download services – there were a very limited number of countries in which our music was available. We weren’t available in China, in India, for the most part in Southeast Asia, pretty much anywhere in Africa, and in much of the former Soviet Union. So, you know, the vast majority of the world’s population had no way to hear Alligator music or any other kind of blues. Now, we’re on the three biggest streaming services in China, and we’re being streamed in India.

Now, in terms of income, we’re making very little from these countries. But, you know and I know that blues has been discovered in country after country at various times. First, there’s a little boom. Then, there are converts. There are people like me and you who fall in love with the music, and it’s their favorite music for the rest of their lives.

What makes an Alligator release different from another label?
The first way is that I’ve chosen the artists. Although other people bring artists to my attention, ultimately who’s signed is 100% my decision. I’ve got a great staff who never get any credit at all, and a lot of them have really good ears, so I will listen closely if somebody says, “You’ve got to pay attention to this artist.” I will tell you that there are artists that I might’ve passed on if a staffer hadn’t come to me and said, “No, you’ve got to listen again. You’re missing it; there’s something there.”

Then, if I’m not going to be the producer, I generally approve of who the producers and mixers are going to be. Very often I’m involved with the mastering, the last step; that’s trying to polish the diamond a little bit. Not every Alligator record is like this, but I like records that sound like they were recorded in a real space with some hard surfaces.

This goes back to Hound Dog Taylor. On that very first record, I thought that the guys would be distracted by headphones, especially Brewer Phillips who liked to move around a lot while he played. So instead of headphones, I set up studio monitors just like stage monitors. And the result of that is that there was a little, natural bounce, the kind of echo you get in a club. And it’s different from the kind of echo you get if you turn up a knob that’s called “echo” or “delay.”