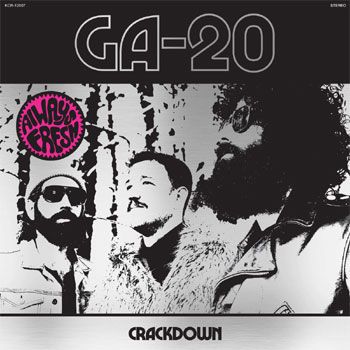 The guitar-and-drums duo format is one with a long and rich history in the blues idiom. That stripped-down setup has also found success in rock acts, from Flat Duo Jets to The White Stripes to The Black Keys and beyond. Taking the concept one step forward, Matthew Stubbs and Pat Faherty launched GA-20 in 2018. With drummer Chris Anzelone, GA-20 released its debut album, Lonely Soul in 2019. The album featured blues classics alongside original songs in a compatible style.

For their second long-player, the Chicago blues group paid tribute to a hero with 2021’s Try It…You Might Like It! GA-20 Does Hound Dog Taylor. The album – made in cooperation with (but not released by) Bruce Iglauer’s Alligator Records – was well-received. Even without bass guitar, the trio produced a sound honoring Taylor’s memory, with a character reminiscent of Peter Green’s Fleetwood Mac. Released the same year, a live EP (Does Hound Dog Taylor Live!) was a bit redundant, but underscored the commitment of GA-20’s instrumental and vocal delivery.

For Crackdown, the group expands its sonic palette while remaining true to its roots. “Fairweather Friend” is steeped in the blues, but owes a debt to ‘60s garage rock and the punk aesthetic as well. As before, the group’s guitar work features thunderous overtones that imply the presence of bass guitar, rounding out the sonic frequencies in a pleasing manner. Songs like “Fairweather Friend” maintain blues structure, but incorporate a subtly pop-leaning character that should serve to draw a wider audience.

The loping “Dry Run” is informed by country blues, but applies those values to a decidedly electric arrangement, with production values heavy on slap-back echo, giving the song a classic Sun Studio feel. Released as a single ahead of the album, “Easy on the Eyes” draws its melody from well-worn blues phrasing, yet it pulls the melody into the 21st century, creating something equal parts modern and reverent. Anzelone’s splashy, clattering percussion is the perfect foil for the stinging lead and hypnotic ersatz-bass guitar.

With crowd noises in the background, “Crackdown” has the feel of a soulful dance floor raver, with hints of The Meters and Booker T & the MGs added to the mix. The instrumental dialogue between the two guitarists is crackling with excitement. The album’s sole cover is an ace reading of Ben E. King’s “Just Because,” sped up and all but reinvented for current-day listeners.

“By My Lonesome” rocks hard, conjuring thoughts of early rock’n’roll; it’s a cousin to Nick Curran’s 21st century retro masterpiece, Reform School Girl. The blues shouter “I Let Someone In” is cut from similar cloth, but its slower pace only heightens the danger and excitement. “Double Gettin’” features snaky, sultry percussion that encourages hip shakin’.

The uniformly astounding Crackdown blows by in less than 29 minutes, doubling down on the retro character of GA-20’s chosen style. But quality wins out over quantity every time, and the latest from GA-20 is nonstop quality. Carefully yet confidently expanding their musical perspective, the trio has all the elements for breakout mainstream success.