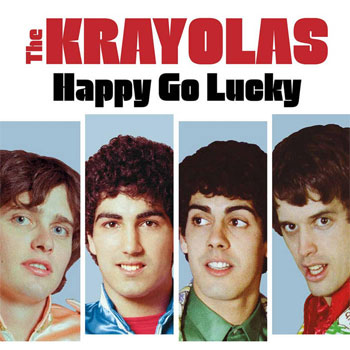 If the Smithereens were from Texas instead of New Jersey – and if they built on their Beatles influences not by exploring an affinity for Black Sabbath but instead for the Sir Douglas Quintet – then they might sound a bit like The Krayolas. With a chirpy demeanor, jangling guitars and peppy hand claps, The Krayolas made a fistful of winning tracks way back in 1982, releasing some of them as their long-playing debut. Now – some four decades later – those tracks are getting a well-deserved reissue. And this new expanded reissue* of Kolored Music (now retitled as Happy Go Lucky – on CD, vinyl and digital – is appended with previously unheard bonus tracks from the same era.

(* The band insists it’s not a reissue, and considering the remixing and track additions, I’m inclined to agree.)

The aptly-named Happy Go Lucky has the shiny, good-time vibe of classic AM gold radio of the early 1970s, with a shimmering, uptempo new wave mindset applied to the songs. Liberal use of brass provides a sonic connection to the Latino roots of the band.

“Love is Gonna Getcha” sounds for all the world like a lost classic from a decade before these songs were recorded. The strings and brass evoke an innocent time. But it stands in sharp contrast to powerful rockers like “All of the time,” a tune that e learn was a favorite of Kim Fowley’s. Thank goodness Fowley didn’t get his hands on the band; the production here by the band is clear, sparking and up-front, showcasing the band’s many strengths.

The production values are startlingly high, especially for a somewhat unknown band on an equally obscure label. On the original release of record back in ‘82, Trouser Press took notice, judging it “an impressive start.” And indeed it is: brothers Hector and David Saldaña display skill and professionalism far beyond their tender years.

The Krayolas know how to rock: “Al Coda No. 1” sounds like a heretofore unheard collaboration between The Lyres and ? and the Mysterians, with a Mariachi brass section dropping by to help out. The ba-ba-ba vocalisms that open “Don’t Give Up Hope,” on the other hand, show that The Krayolas drew as much from The Turtles, The Cowsills and/or Spanky and Our Gang as anything else. But on “You’re Not My Girl,” the band cranks out a rocker that wouldn’t be out of place on Children of Nuggets or one of those Rhino DIY collections.

And what’s crazy (in the most delightful sense) is that it all works. What on paper might read like a crazy-quilt mishmash of opposing styles is in reality a wonderful musical experience, one that draws from those influences but distills them into something quite unique. There’s very little about Happy Go Lucky that pegs it in the early 1980s. The word timeless gets bandied about too often, but in this case it really does apply. For glistening pop of the first order, Happy Go Lucky is a must-listen in any era.

N.B.: You will surely also enjoy The Krayolas’ Savage Young Krayolas. Read about it here.