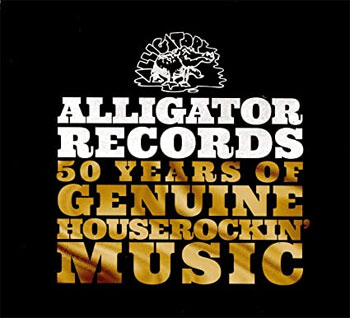 From the artists’ perspective, what makes being on Alligator different?
I’ll say this loudly: They’ll never get the personal attention from any other label that they’ll get from Alligator. Even in the days before cell phones, every artist had my home number. And if there was a problem, they knew they could call me any hour of the day or night. Literally, I remember artists calling me in the middle of the night saying, “My car’s broken down, and I’m stranded by the highway, and I don’t have enough money to get it fixed.” I remember buying a van for Lil’ Ed & The Blues Imperials by long distance, and just hoping it was a decent van, because they were in the middle of a tour and their van was not going to start again.

I remember Lonnie Mack calling me up and saying, “You know, I just played this gig, and the guy says he’ll pay me in the morning.” I said, “Don’t let that guy out of your sight. Tell him he’s sleeping in your motel room tonight. If he goes to the bathroom, hold his dick!” [laughs] That’s exactly what I said to him, and he thought it was funny too.

Some artists call on me for a lot, and some artists call on me very little and just expect me to do a good, professional job with their records, and that’s fine too. But I always refer to Alligator as a family, not as a label. I know I said this to Tinsley and Shemekia when they left: “You can leave the label, but you can’t leave the family.” And they eventually came back.

After all these years, are you still discovering music?
Yeah, absolutely! The other night I was on Spotify listening to fairly obscure Texas guitar players from the mid-1950s. I started by searching Travis Phillips who Rick Estrin played with long before Little Charlie & the Nightcats. And then that led me to listening to Cal Green and Cal Valentine.

And I was just reading about blues and R&B artists who cut a few 45s and 78s that I’ve never heard. So, for me, this has been like a bottomless treasure chest. I think that for many fans, the discovery process continues their whole lives. Of course, people in China, and people in India, and people in Africa are going to discover Alligator artists and begin streaming them, and I’m confident that, over a period of time, the streaming income will grow. I love physical recordings, but this will be the main way that the world hears music.

The track selection on the 50 Years collection makes the point that there’s plenty of really good new music, too. Was it an intentional goal of yours to get that point across?
Oh, yes! That was absolutely intentional. For one thing, I wanted to showcase the artists who are currently with the label. I wanted my whole current roster represented, but I also definitely wanted to show people the way the music is evolving. Blues evolves slowly, but it evolves. Part of my mission is the future. So, I definitely wanted Kingfish and Selwyn and — even though they’re not kids — Shemekia and Toronzo, amongst others. Because they’re pushing the envelope. For me, that’s an important part of the statement.

Your 2019 memoir Bitten by the Blues [reviewed here] is a great read, but your ending chapter doesn’t strike a very optimistic tone about the future. Two years later, do you still feel that way?
At the end of my book, I didn’t feel very hopeful about the future. I was thinking, “What happens if we stop making enough money and we just don’t make enough to survive?” I was thinking about legacy.

But now I’m thinking, “Okay, maybe we’ve turned the corner on the streaming services. Maybe, because they’re worldwide now, it will be more likely that we can carry forward in the future.” Part of my mission is to launch more careers of young blues artists. I want to make sure that I’ve launched or helped careers of artists who are going to be carrying this music forward, who have their own vision, who want to speak to contemporary audiences but are proud of being part of the tradition without simply repeating it.

The first time I saw Gary Clark Jr. after he became a national artist, I went to see him in a kind of a showcase in Chicago. He used a lot of effects — phasing and fuzz boxes. It still felt like blues, but it was certainly rocked-out blues.

But then in the middle of his set, he put down that guitar, he picked up an old semi-hollow electric guitar and did a couple of B.B. King songs from 1952 and one from about 1954. First of all, he did them really well, and it was clear he immersed himself in the music. And also, it was clear that he knew the difference between how B.B. sounded in ’52 and ’54. So, he was listening from a real hardcore fan’s perspective. To me, he was saying, “Okay, I’m trying to push this music forward, but I am proud of what it’s been and what I’ve learned from it.”