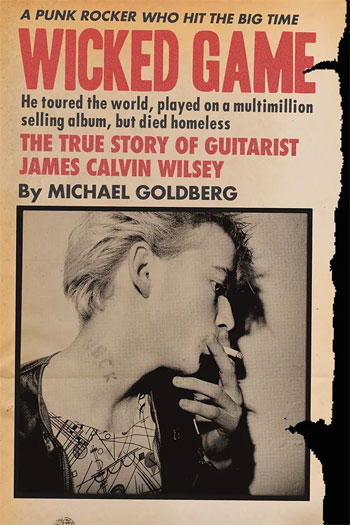 San Francisco and the Bay Area have long been fertile creative ground. Even confining the discussion to music, there’s been a staggering volume of important music coming out of the Bay Area: jazz, psychedelia, folk rock, punk, metal, new wave…on and on. Among the long list of luminaries, the name Chris Isaak deserves mention. His haunting, roots-rock influenced sound has moved millions, most notably in the form of “Wicked Game,” a hit in 1990.

What many outside the region (myself included) may not have known is the extent to which credit for that song’s alluring quality is thanks to guitarist James Calvin Wilsey. A masterful guitarist with a superb regional pedigree – he had been bassist in The Avengers – Wilsey created a remarkable sonic atmosphere on Isaak’s records.

That, in and of itself, might not warrant a book-length treatment. But Wilsey’s life story – one filled with soaring highs (of the good and bad kind) and plummeting lows (albeit only of the bad variety) forms a chilling narrative. And that story is expertly told by longtime music journalist and first-hand observer/participant in the Bay Area’s music scene, Michael Goldberg. Across 400-plus pages, Goldberg’s Wicked Game: The True Story of Guitarist James Calvin Wilsey charts the musician’s life, an ultimately doomed story line that runs from his troubled childhood to his punk years to his time with Isaak and beyond.

There are many well-drawn and vivid characters in the pages of Goldberg’s deeply-researched work. But perhaps the character (so to speak) that looms largest over the narrative is heroin. The destructive and highly addictive illicit drug casts a shadow over Wilsey’s life (and ultimate death).

So while Goldberg’s Wicked Game is a fascinating, engrossing and well-paced tale, it’s also unrelentingly downbeat and depressing. As with Citizen Kane and Orson Welles’ unnamed reporter, Goldberg’s approach to the story begins at the end, and then flashes back to the beginning. It’s an inspired way to tell the story, but it lets the otherwise unsuspecting reader know right from the start that the story doesn’t end well.

Drawing at key points from the acquired wisdom of experts in addiction (doctors, researchers and actual addicts), Goldberg reinforces the narrative by placing events into the larger context of drug abuse. And if that weren’t enough, he also dives into the seamier side of the music industry, with a brief but highly illuminating section dealing with the modern-day variants of payola, the practice of, basically, paying for radio airplay. (Hint: despite the indisputable virtues of “Wicked Game,” its commercial success is thanks at least in part to that shady but widespread practice.)

One need not be acquainted with the San Francisco punk scene, nor Isaak’s body of work, nor the book’s main character at all to find Wicked Game a worthwhile read. Michael Goldberg has done a service to the memory of Wilsey, to his son (read the book and you’ll understand) and to the musical and cultural milieu from which Wilsey sprang forth, flourished and ultimately departed far too soon.