A Chat with Chatham Rabbits

Chatham Rabbits is the wife-and-husband duo of Sarah and Austin McCombie. Sarah came up in music as a member of old-time group The South Carolina Broadcasters, and Austin has played everything from “today’s modern country” to beach music to electronica. But together as Chatham Rabbits, the couple makes rootsy music with the flavor of their home state. Ahead of a three-month tour that included a March 5 date in Brevard, I spoke with Sarah about Chatham Rabbits and a life in music. 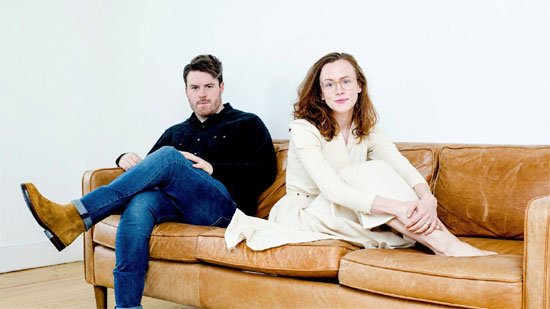 In what ways does the character of North Carolina comes through in your music?

North Carolina is like our third band mate; it’s an ever-present part of what we do. Austin and I are both native North Carolinians. I grew up in the country near Saxapahaw, and Austin grew up near the coast in Wilmington. We feel very deeply connected to this state and its landscape, and a sense of place comes up in our songs all the time.

How did being a member of the South Carolina Broadcasters prepare you for making music with Austin?

I was a full-time college student, and I was also in the Broadcasters full time, so I was like a candle burning at both ends. I was 18 when I joined the band, so I got a lot of my wild experiences out early on. That way, when Chatham Rabbits started and we started playing full time, I was like, “Okay, I don’t want to drink Miller High Life until 2 a.m. and feel [terrible] the next day. I want to be more organized, and I want to take better care of our fans.”

Do all of your songs contain stories?

Yes, most of them are stories. Austin and I both write a lot about people we know or people we’ve met. We don’t really write a whole lot of metaphorical things, you know? You’re not going to find a lot of stuff like that in our songs where it’s hard to understand what’s happening. I feel like we’re pretty straightforward songwriters and are basing things off of real, tactile experiences that we’ve had.

You and Austin have Patreon fan support platform. How has that been going?

It’s been awesome! Everybody and their brother – rightfully so – was starting a Patreon in March of 2020 when the pandemic hit. We were thankful that we started a year earlier. We’ve gotten to know a lot of our fans through it, and we’ve hosted a bunch of concerts at our house, and it’s just been really cool to connect with a tight knit community. People within our Patreon fan club have become friends online and in-person.

Chatham Rabbits launched a “Stay at Home Tour” during the Covid era. What did that entail?

That was our mobile concert experience. We pulled a trailer behind our tour van and rigged it up with solar panels to power our whole sound system. We took submissions from neighborhoods across North Carolina, and then we went and played music for people while they stood in the cul-de-sac, sat in their front yards or on their porch. We visited 194 neighborhoods! I cannot even describe how touching and experience it was. People were genuinely happy to see us; even if they didn’t know who we were, they were just like, “Oh, there’s something to do!”