Reviving the Old Guard: The Palace Guard, Part One 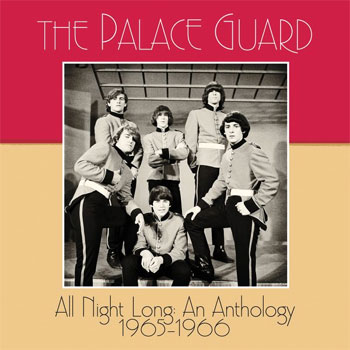 Emitt Rhodes was something of a cult figure in music. The singer, songwriter, multi-instrumentalist and producer never achieved widespread commercial success or fame, but his music inspired and influenced many who would follow him. Hailed in his early solo artist years as a “one-man Beatles,” Rhodes released a superb run of albums in the early ‘70s before virtually disappearing for more than 40 years.

Even before his solo period, Rhodes was the central figure and primary songwriter in The Merry-Go-Round, a Los Angeles psychedelic pop group. But The Merry-Go-Round wasn’t his first professional group. That honor goes to The Palace Guard, a Hollywood outfit that existed for a few years in the middle ‘60s. The young group featured three singing brothers – Don, John and David Beaudoin – backed by guitarist Chuck McClung, bassist Rick Moser and 15-year-old Rhodes on drums.

The band recorded a clutch of quality tunes, but The Palace Guard never made an album. In 2021 Grammy-winning label Omnivore Recordings collected the group’s entire body of recorded work – 12 songs – and released it as All Night Long: An Anthology 1965-1967.

The Palace Guard many have never achieved national prominence, but they were successful nearly right from the start. Formed in 1964 as The Emerals, the group was based in Hawthorne, California, the L.A. suburb that was also home to another pop group featuring three brothers: The Beach Boys. The group landed a prized gig at Reb Foster’s Revelaire in Redondo Beach. “We got in there as The Emerals,” says Moser. “We wore our green jackets and skinny little ties.” They became part of a rotating cast of acts playing the venue, along with The Crossfires. That group would soon change their name, becoming The Turtles.

That Revelaire gig led to others, including dances in Hawthorne and Torrance. And in a somewhat cynical and hamfisted attempt to jump on to the British Invasion bandwagon, the group’s management – the Beaudoins’ father and a controversial character named Gary Bookasta – put the band in vaguely military-styled uniforms, and they changed the group’s name as well.

“We were told to speak with accents and tell everybody we were from Middlesex or something,” Moser says. “Because we wanted to be known as part of the British Invasion.” The management duo pushed the band hard, insisting that they practice six days a week. “The only day we had off was Sundays,” Moser says. Those practices took place in garages at the succession of homes in which the Beaudoins lived. “We constantly moved,” Moser says, “because of [Beaudoin’s] failure to pay the rent.” 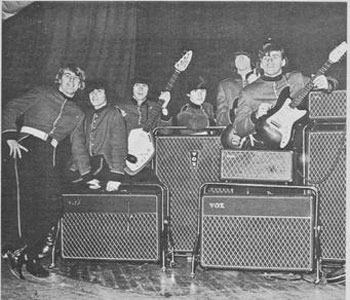 The hard work paid off, but connections made the real difference. In 1965, Bookasta and popular radio deejay Dave Hull joined forces to open a music venue on Sunset Boulevard. Dave Hull’s Hullabaloo Club was situated directly across the street from the Hollywood Palladium. By December ‘65 The Palace Guard was installed as the Hullabaloo’s house band.

West Covina resident Mike Baker was about the same age as the members of The Palace Guard, and he saw them many times onstage at the Hulabaloo. He recalls the band’s dramatic method of opening a show. “The stage curtain would be closed, and the band would start playing ‘I’m a Man,’” Baker says. “The curtain would open to reveal a rotating stage. By the time the band finished the song, they would be facing the audience.” They’d play their set – a mix or originals and popular covers – and then two additional acts would follow.

Gary Bookasta’s aunt, Trudy (sometimes spelled Tudy) Hudgings had started a record label, Orange-Empire Records, in 1964. After some unsuccessful singles by artists including Mickey Rooney Jr., Hudgings signed The Palace Guard to her label. The group’s first single was “All Night Long,” a Don and John Beaudoin original. “Their songs got priority,” Moser says. The jangling pop of “All Night Long” was wedded to a (by ‘65 standards) mildly racy lyric. With an arrangement by Phil Spector associate Jack Nitzsche, the song gained local airplay. Many decades later it would be featured on the Rhino boxed set Where the Action Is!: Los Angeles Nuggets 1965–1968.

Moser has few recollections of working with Nitzsche, though. “He never came around until we went into the studio,” he says. “I do remember him working with the Beaudoins on their own. Sometimes, we would come into the studio after they had been there for hours. Then he would be there during the recording.” By the time Moser, Rhodes and McClung arrived at the studio, most decisions about how the songs would be played and arranged had already been made. “There was a lot of behind the scenes stuff before we showed up,” Moser says. “We were treated like the bastard stepchild.”

Trudy Hudgings wrote songs, too, and insisted that the band records some of them. “We had to deal with Trudy, because Gary was getting money from her,” Moser explains. The band cut Hudgings’ “Playgirl,” which was issued as the B-side of “All Night Long.” Hudgings’ soft-pop lyric and the song arrangement owes more to the East Coast girl-group sound than the British Invasion or the emerging West Coast pop aesthetic. “We all hated that song with a passion,” Moser says.

“We used to spend a lot of time at Trudy’s house practicing her songs,” Moser recalls. “We were sick of her, and we started screwing around with that ‘Playgirl’ song. She got pissed at us, sent us all home, and threatened to cut Gary off.” Moser says that an enraged Bookasta confronted the band. “He was screaming and yelling, ‘You’ve got to stop acting like kids! She’s funding all this!’” But the boys in The Palace Guard were kids. “I was 17 years old,” Moser says.”We finally ended up doing that song, but we never played it on stage. Because it sucked.”