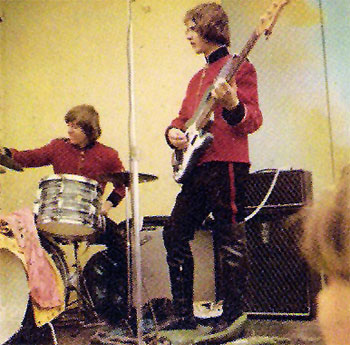 Far better was the A-side of The Palace Guard’s second single, the moody, minor-key “A Girl You Can Depend On.” The flip side of that single – released as a promo disc only – was a credibly soulful cover of Wilson Pickett’s “If You Need Me.” Moser says that recording sessions were quick affairs. “In the beginning, it was just all of us going into an 8-track studio somewhere and recording,” he says.

At the same time the singles were being recorded and released, The Palace Guard stayed busy with local gigs and their standing engagement at the Hullabaloo. In that role, the group came into close contact with some of the biggest emerging acts of the era, including The Association, The Yardbirds, Paul Revere and the Raiders, The Hollies and many others. “We hung with them, we talked to them,” Moser says. “Everybody was very, very nice.”

They even crossed paths with their more famous Hawthorne neighbors. “The Beach Boys used the Hullabaloo to practice,” Moser recalls, offering his view that their band’s drummer, Dennis Wilson was “a head case.” He says that Dennis had trouble playing the drum part for “Good Vibrations.” They tried it ten, twelve times and then finally gave up,” Moser says. “We played it in our set, and did it as well – if not better – than they did.”

The band’s strict practice regimen made them a tight performing unit. “We played songs exactly like the records,” Moser says. “No turnarounds, no extra anything. And we were only allowed to have five seconds between songs.” When one tune ended, after a cursory thank-you from one of the Beaudoin brothers, Rhodes would count in the next song, and off they’d go.

As Moser writes in his liner notes for the new Omnivore anthology, the band’s management was intent on keeping The Palace Guard local. That lack of exposure meant that wider success was never in the cards. Budding artist Emitt Rhodes wasn’t given an opportunity to sing or write. By 1966, Rhodes had had enough, leaving the group and joining The Merry-Go-Round. His place behind the drum kit was filled by Terry Rae from The Driftones (who subsequently changed their name as well, becoming The Yellow Payges).

Even without Rhodes, the Palace Guard’s third single for Orange-Empire was a solid entry. “Falling Sugar” combines bright, bouncy folk rock style with Brill Building pop and winning vocal harmonies. When Rhino’s Nuggets: Original Artyfacts from the First Psychedelic Era, 1965–1968 was reissued in 1998 as an expanded 4CD set, “Falling Sugar” was included. The song’s flip side, “Oh Blue (The Way I Feel Tonight)” applies an Everly Brothers style to a folk-rock arrangement, but it’s marred by an out-of-tune guitar solo.

A stomping fuzz-guitar riff is at the center of “Saturday’s Child,” written by David Gates and also recorded – around the same time – by The Monkees. Backed by a cover of r&b singer Claudine Clark’s 1962 ditty “Party Lights,” it was released as a single on the Parkway label. Also in 1966, The Palace Guard cut two Don and John Beaudoin originals. The waltzing A-side, “Calliope” featured gimmicky wooden train whistle and was wholly out of step with the rock sounds of ‘66. The flip, “Greed” was much better, a driving garage rock with a stomping rhythm section and deft taps on a gong. Like the previous Parkway single, it sank without a trace in the marketplace.

The circumstances under which it all took place are murky, but in 1966, a single (“Little People” backed with “Summertime Game”) was released and credited to Don Grady and The Palace Guard. At the time, Grady’s star was in ascension; he was an actor on the popular TV comedy My Three Sons. Initially the session was to feature Grady on lead vocals plus additional vocals by the three Beaudoins and backing singer Mike Conley. The instrumental parts would be cut by session musicians. 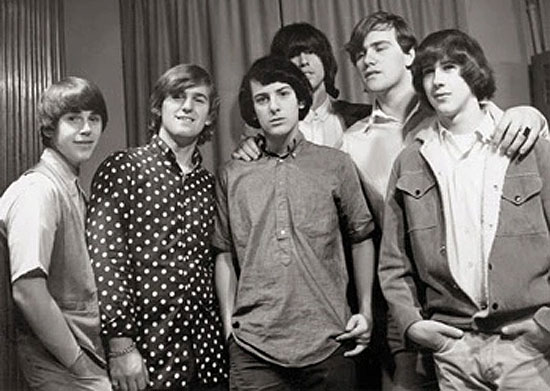 “I was called out of high school by my dad,” Moser recalls. “He said, ‘Hey, they need you at Gold Star. Go to the office and check out, and get up there as fast as you can.’” Apparently, arranger Don Ralke didn’t like the bass playing of the session musician, so Moser got the gig.

The two Grady songs don’t sound a lot like The Palace Guard; Grady’s vocal style is very much in an early ‘60s teen idol crooner mold, sort of a third-rate Rick Nelson. The flip side tune features some ersatz Tijuana Brass styling. In the new CD liner notes, Moser makes the point that while Grady did appear onstage with The Palace Guard on one occasion, he was never a member of the band.

The Palace Guard’s management did eventually let the group hit the road, but rather than embark upon a tour of major U.S. markets, the band was routed through clubs in Montreal and Toronto, with one gig in New York City. The group auditioned for the Ed Sullivan Show but ultimately weren’t chosen to appear; Moser doesn’t know why. The entire experience left the band – Moser in particular – disillusioned.

Threatened with a lawsuit if he quit immediately, the bassist remained with the group long enough to appear on an episode of popular daytime variety TV show Where the Action Is. The band folded not long thereafter. Today, Rhodes and two of the Beaudoin brothers have since passed away; the other surviving members haven’t been in touch in years.

The ten Palace Guard sides (plus the two backing Grady) have been compiled once before, on a 2003 CD release from the Gear Fab label. That compilation featured liner notes including reminiscences from late-period drummer Terry Rae. The Omnivore release features a different track order and much improved, remastered audio by Grammy winner Michael Graves.

Moser recalls how the Omnivore reissue came about. “I got a call from [producer] Brad Rosenberger. He said, ‘Hey, I want to put your album together again and maybe do a better job than the last guy did.’ Of course, I said yes,” Moser recalls with a chuckle. “I didn’t realize there was still such a market for music from the ’60s.”