PFM Cooks Up a Pandemic-era Album

An edited version of this story appeared previously in Prog magazine. 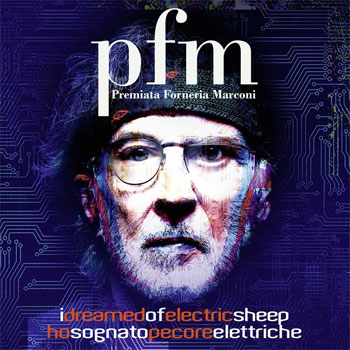 One of the most groundbreaking progressive groups of the 1970s, PFM is still making music of superb caliber today. Gathering safely in Milan’s White Studios during the pandemic, the musicians recorded I Dreamed of Electric Sheep (released October 22) as a group, while guest artists including Ian Anderson and Steve Hackett provided their parts via file sharing. The isolation brought upon by the pandemic – and technology’s role in both heightening that isolation and bridging the gaps – is a central theme of the new record.

When drummer Franz Di Cioccio and four fellow musicians founded their group in Milan in 1970, they chose a name that they believed would be both unusual and memorable: Premiata Forneria Marconi. The name translates as Award-winning Marconi Bakery. Today Di Cioccio laughs as he explains their thinking: “We are doing music the way bakers are making bread,” he explains. “With our own hands, with all our ancient knowledge, working on it until it comes out the way we want.”

Premiata Forneria Marconi’s music builds upon a European/Italian classical foundation, folding in regional folk textures, and applying those ingredients in the making of exuberantly progressive rock. “It’s very tasty bread,” says bassist Patrick Djivas, who joined the group in 1974 and today co-leads it with Di Ciccio.

The band’s first single, “La carozza di Hans” was a massive hit in Italy. With Minimoog synthesizer as a central component of its sound, the track represented a significant departure from the kind of music then appearing on Italian music charts. Premiata Forneria Marconi drew inspiration from King Crimson and Jethro Tull, but the group filtered those influences through a distinctively Italian sensibility. The result was something unique: with a rock lineup augmented by synth, flute and violin, the band certainly looked and sounded different to Italian listeners.

Even from the group’s earliest days, the decision was made to focus on albums rather than singles. That was a gutsy move in the Italian music marketplace; singles were still the preferred medium. “We wanted the people to listen to the whole thing,” says Djivas. And they did: released in 1972, the group’s debut album, Storia di un minuto was a critical and commercial success in Italy, paving the way for wider exposure.

But the group’s name proved confusing to fans. “When we were playing a concert, the emcee didn’t want to say ‘Premiata Forneria Marconi,’” says Djivas. And when the band started touring outside Italy, the name seemed even more perplexing. “When we first came to England, they didn’t pronounce [our name] very well,” says Di Ciccio. “They thought it was the name of three guys: ‘Which one’s Marconi? Who’s Premiata?’” laughs Djivas. So they shortened the band name to PFM.

Starting with 1973’s Photos of Ghosts, the group released an acclaimed run of albums on the Manticore label, a record company created by another (much better known) three-letter group, ELP. Greg Lake had discovered the band while on tour in Italy, and subsequently signed them to his band’s new label.

Photos of Ghosts marked an important change for PFM. Peter Sinfield (ELP, King Crimson) wrote English lyrics, and then-lead vocalist Franco Mussida sang them in English. Sinfield’s words were completely new rather than literal translations of the original Italian. Djivas vigorously disputes reports that PFM weren’t pleased with Sinfield’s work. “We were very happy,” he says. He singles out the lyricist’s work on “Celebration” (from Photos of Ghosts) for special praise. “It’s totally different from the way we wrote it, but it’s beautiful.”

But PFM’s greatest strengths in those years centered around its instrumental work. Complex yet rooted in melody, the band’s recordings and live work showcased an ambitious yet accessible brand of progressive rock. A live album, 1974’s Cook, displayed the group’s onstage skill, power and finesse. By the end of the decade, PFM had reverted to Italian lyrics and vocals on its releases.

Though the group went on hiatus for a decade, PFM released more than a dozen albums between 1975 and 2013. By 2015, founding members Franco Mussida and Flavio Premoli had departed, leaving the rhythm section of Di Ciccio (now lead vocalist) and Djivas as the core of the band.

In 2017, PFM reasserted itself internationally, again recording vocals in both Italian and English. American lyricist Marva Jan Marrow – who began working with PFM on 1975’s Chocolate Kings – penned English lyrics for Emotional Tattoos. Like Sinfield, she wrote new lyrics rather than translating from Italian. “She knows what we are thinking,” says Djivas. “She knows what our ideas are, and she has the same sort of feelings.”

Marrow wrote English lyrics for the new I Dreamed of Electric Sheep as well. “Her lyrics don’t sound like ours,” Djivas says, “but she has the same way of looking at life.” Both the Italian and English lyrics for I Dreamed of Electric Sheep are inspired in part by ideas found in Philip K. Dick’s 1968 similarly-titled science fiction novel (later adapted into film as Blade Runner).

“Franz and I like science fiction movies very much,” Djivas says. And they both found parallels between the world depicted in Blade Runner and today’s society. “It seems like there are two different kinds of people: humans and androids,” he says. “But today’s androids are not made of plastic and iron. They’re made of flesh like all of us, but they think like androids, because they’ve [taken] a little too much from…not exactly technology, but social media.”

Because I Dreamed of Electric Sheep has substantial and compelling instrumental passages, listeners may find the Italian-language version quite nearly as appealing as the English one (the new release includes both). In addition to Di Ciccio and Djivas, the current-day PFM features guitarist Marco Sfogli, Lucio Fabbri on violin and viola, keyboardist Alessandro Scaglione, and multi-instrumentalist Alberto Bravin.

The record opens in dramatic fashion with “Worlds Beyond,” an instrumental nod to the group’s classical forbears, showcasing Fabbri’s string work. Djivas says that the song is meant to chart PFM’s history, from the musicians’ classical beginnings to more modern “complicated, dystopian” sounds. “And we wanted a song without lyrics,” Di Ciccio says. “We wanted the audience to build their own meaning.”

Another of the album’s many highlights is “Electric Sheep,” with its crackling dialogue between Djivas’s breathtakingly brisk bass runs and Sfogli’s wah-wah guitar. The track’s signature riff is referenced again in the tantalizingly brief “Transhumance” that closes the album. (A longer “Transhumance Jam” follows.)

The album also features four guest musicians of note. Founding member Flavio Premoli and Luca Zabbini of Italian group The Barock Project both provide additional keyboards. Progressive rock legends Steve Hackett and Ian Anderson appear on “Kindred Souls.” Both UK-based musicians have a long association with PFM. “I first heard of them when [Jethro Tull] played Italy in the ‘70s,” says Anderson. “They gave me a beautiful old violin as a gift; I still have it in my music room. They were the premier Italian Prog band then, and still are now.”

Hackett fondly recalls Genesis sharing bills with PFM in the early 1070s. “We were both young bands at that time, just starting out,” he says. “They had a distinctive, original sound. They’ve always been adventurous and melodic.”

Before the pandemic put a stop to public gatherings, PFM maintained a busy schedule. “In 2019, we did 120 concerts in Italy, and 20 outside of Italy,” Djivas says. “We weren’t even thinking about doing an album, but when the pandemic situation came, we thought, ‘We can’t waste time, especially at our age!’” Now with venues in Italy allowing full capacity, the group is scheduling concerts to showcase the traditional-meets-modern progressive sounds of I Dreamed of Electric Sheep. “The prog scene in Italy has always been very powerful,” Djivas says. “And it still is.”

Stay tuned for much more from my interview with PFM…