The PFM Bonus Interview, Part 1 of 3

Premiata Forneria Marconi (or PFM, which is easier to say and quicker to type) is the premier Italian progressive rock group. PFM was the first prog group from Italy to achieve fame and success outside the country, paving the way for other international groups. And when the band began releasing albums with English-language lyrics (written by Peter Sinfield, lyricist for King Crimson and ELP), they had even more success. The band reached its commercial zenith in the mid ‘70s, touring the U.S. and even appearing on The Midnight Special, but – allowing for a ten-year hiatus starting in the late ‘80s – they’ve continued to present day.

Now led by founding member and drummer (and lead vocalist) Franz Di Ciccio with “new guy” bassist Patrick Djivas (who joined in 1974), PFM has created one of its finest efforts to date with 2021’s I Dreamed of Electric Sheep. I interviewed Di Ciccio and Djivas for Prog magazine; that feature ran here on Musoscribe yesterday. But our hour-long Zoom chat yielded a great deal more of interest than that feature could contain. So here’s an edited transcript of the best-of-the-rest. Note that Franz’s English is better than he admits, but for our chat, he tended to leave most of the talking to Patrick. And when Franz did speak, more often than not it was in Italian, with Patrick translating. – bk 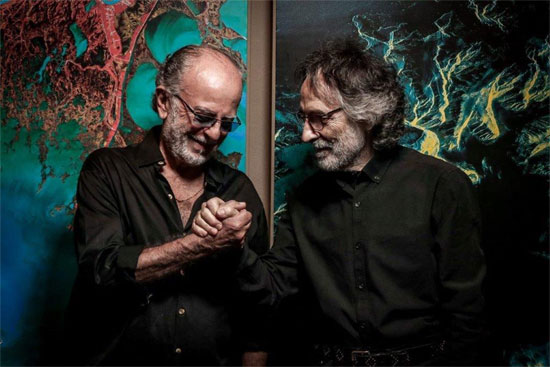 Bill Kopp: I was playing I Dreamed of Electric Sheep on the stereo in my office. And my wife, who works here at home, just down the hall, said, “What is that? That’s really good!” And I said, “Yes, it is! It’s really, really good!”

Patrick Djivas: That’s fantastic! Yeah, that’s really nice of you. We did this album because we really felt like playing. Last year, we couldn’t play with the pandemic situation and everything. So, we’re craving to play, you know? We’re really missing playing on stage.

The last song on the record is a jam session, you know? It’s something that we just put together like that. It’s those things that we do on stage all the time that we never did on the record, besides live albums. So, we did! We said, “Who cares?” Normally this is not the kind of thing you should do on a studio album, but we though, “Let’s do it! Let’s do a gift to ourselves.”

You know, we always ask our friends and people who listen to the album: which are the three songs they prefer. So what are your three songs? The three songs you notice.

“Worlds Beyond,” the title track, and “Transhumance.” Oh, and the “Transhumance Jam,” but that’s four. Tell me about the process of making an album during the pandemic.

Patrick Djivas: Well it’s been, in a way, different, obviously, because we had some problems like everybody else. Franz lives about 40 miles from where I live. I have a studio in my home, so he had to come to my place every day. We were working like we usually do on the very beginning of the album: writing the songs, writing the arrangements, writing the feeling. Obviously, we had problems, because he had to travel with a piece of paper saying, “I have to go there for work.” The police would stop him once in a while and say, “Where are you going?” It was a weird sensation. But we were inside the music we were playing. We didn’t really care what was happening around. It’s like that, you know, when you start working on something like an album, you just sort of forget everything around you, because you’re so focused on what you’re doing. You’re so focused and so into it that you don’t really care what’s happening around, and this is what happened.

Obviously, as far as creativity, we didn’t have any problem. It was just like any other album. Sure, we had a few practical problems like the studio. When we started to work in a regular recording studio, sometimes the studio was unavailable because they had to do some things with the sanitation, disinfecting when you have to clear up and clean up everything. So, maybe we would lose one or two days.

Then, Marco Sfogli, our guitar player, lives about 100km from here, you know? Another guy lives 250km from here, so they couldn’t come every day. They had to come once in a while. These were the problems we had. Then, maybe the only real problem that we could have was the fact that we had too much time. Sometimes to have too much is not always the best thing. Because after a while, you start to doubt things you did. You know, you say, “Oh, maybe this could be better.” Then, you put your hands in it and, most of the time, you make it worse!

So, normally, when we get to a point, because Franz and I have a way to work, we sort of do a quality report. We use each other as a quality report on what we do. We decided that, if whatever we do is not what each one of us wants, we keep on working. If one of us says, “No, it’s great, leave it like that,” and the other one says, “No, there’s something wrong,” we keep on working. But when we get to the point that we’re both happy, then we should just record the thing immediately and stop.

We couldn’t do that because of the pandemic situation. So, the only problem was that we could’ve had too much time. But, it didn’t cause any trouble with the record. So, we’re very happy about the way it came out.