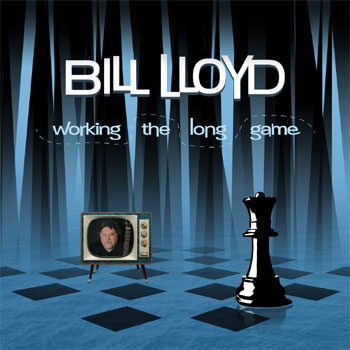 While it’s true that Bill Lloyd first came to prominence as half of the c&w duo Foster and Lloyd – an outfit that did some fine work in that genre – today his reputation centers primarily around his solo work. And that music is much more accurately described as (oh, here it comes) power pop. But highly melodic pop rock is a better – if perhaps wordier – descriptor for what he does. His debut release, Feeling the Elephant, was released in 1987 when he was still working with Foster.

That record contained the swoonworthy ear candy that is “Lisa Anne.” With lyrics like “I’ve got a hole in my life the size of your apartment,” it was clear that Lloyd could deliver hooks, superb melody and intelligent lyrics. Those qualities set him far above the power pop pack, but he didn’t prove to be a particularly prolific artist: by 2004 he had only released three more solo albums. That’s less than an album every four years, more the pace for Boston or Fleetwood Mac (ask your grandparents, kids).

That same year, Lloyd did make a fine album with musical peer Jamie Hoover, best known as both a producer and member of The SpongeTones. (Tangentially speaking of the ‘Tones, their “Christmasland” and Lloyd’s beyond-lovely “Underneath the Christmas Tree” are highlights of a wonderful yet overlooked Holiday-themed various artists CD from 1991 called Yuletunes: A Collection of Alternative Pop Chirstmas Songs.)

And to be fair, Lloyd wasn’t just sitting around; he was one-fourth of supergroup The Sky Kings, who cut an album set for release in 1997 but had to wait until Rhino Handmade finally unearthed the tapes for limited release in 2014 (by which time they had long since broken up).

Happily – and nearing relevance to the subject at hand – Bill Lloyd has been on a relative tear in the years since. After another quiet period album-wise, starting with 2012’s Boy King of Tokyo, he has been releasing at a pace closer to one record every two years (not even counting compilations).

And in acknowledgment of the facts that (a) those who appreciate his music ought to have easier access to it and (b) his music has rarely received the sort of promotional push it so rightly deserves, he has set about making select items form his back catalog available once again. Spyderpop Records, a power pop label now aligned with like-minded Big Stir Records, has reissued Bill Lloyd’s 2018 album, Working the Long Game.

And I’m here to tell you that it may well be his finest work yet. Twelve songs make up the album, and while they’re a variety of Lloyd originals, co-writes and even a couple of deep-dive covers, the songs are consistent in most every other regard. When he works with another songwriter, as he does with Graham Gouldman of 10cc on “What Time Won’t Heal”, or Aaron Lee Tasjan (“Go-to-Girl”), or Cheap Trick’s Tom Petersson (“Yesterday”), he’s combining his sharply honed skills and talents with some of the best.

There aren’t any weak tracks at all on this set. The hooks are razor sharp, the playing and arranging are note-perfect, the vocals are sublime and filled with whatever emotion the particular song needs. It would do a disservice to the care and effort of any song to praise another above it, so instead I’ll simply encourage my readers to get this disc and luxuriate in some pop perfection.

I can’t help but think that if most purveyors of so-called power pop heard this disc, they’d change careers. He does it so well as to render the efforts of many others wholly unnecessary. I’d go right ahead and name it my Favorite New Album of 2021 right here and now, but due to its reissue status, it’s disqualified on a technicality. Do expect to see it ranked among my short list of Favorite Reissue/Archival/Compilation sets when I publish it in late December.