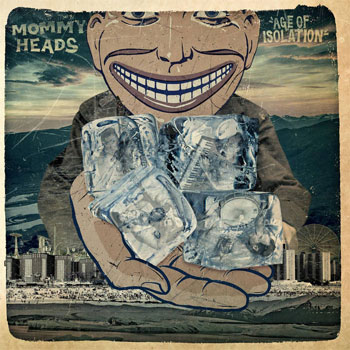 The Mommyheads aren’t widely known outside of New York City (and Sweden), and that’s a shame. With wit that sometimes rivals that of XTC, a melodic sense that recalls 10cc and a prolific nature (more than a dozen albums released, even while taking a decade-long hiatus), The Mommyheads are one of pop music’s undiscovered gems.

And they’ve been staying busy the last few years. Since I interviewed the group in 2018, they’re released three new full-length albums. And they have also overseen expanded reissues of four earlier albums. The latest of the new lot is Age of Isolation, and it’s another brilliant example of the qualities that make the group special.

The baroque textures that characterize some of the group’s best work is on display from the start. “TV Dinner” is a finely wrought tune that draws the listener into the Mommyheads’ world. The tune starts out being one thing, and – a Mommyheads signature approach here – it soon becomes something else entirely.

The band can rock, too: “Last Silver Dollar” is built around a stinging guitar lick and an electronic beat that suggests a muscular Radiohead with sturdier pop values. “Don’t Ignore the Air” starts off sounding a bit like The Alan Parsons Project’s “Eye in the Sky” but then it shifts gears as well, into something that feels like a cross between London Town-era Wings and skewed ‘90s alternarock a la Michael Penn.

In fact that last reference is a handy one to underscore the fact – like Penn – that The Mommyheads are skilled manipulators of the pop music form. The take familiar elements and recast them in their own inimitable style. Arty, skewed pop is their forte, but they’re not doing it not for the sake of artiness or skewed-ness.

The title track is hypnotic, again redolent of Radiohead. But the melodies – even though they’re sophisticated and slightly unconventional – will appeal to those who delight in music that swings for the fences without a whiff of pretense. “A Shift in the Astral Plane” may be the best track here, but there aren’t any duds.

Fitting a title like Age of Isolation, The Mommyheads’ latest album is pervaded by a contemplative, inward-looking nature. But they still rock out on tracks like “Statues (Painting, Poems, Books),” a tune that might remind some listeners of Queen or Jellyfish.

The group had what looked like its major label breakthrough in 1997, with a self-titled album on Geffen Records. The big time didn’t materialize for the band, but thankfully they didn’t throw in the towel. Intelligent, literate rock doesn’t get much more intelligent – or literate, for that matter – than The Mommyheads, and now, thirty-plus years after their debut, they’re making some of the best music of their career. I’m doing my small part here to get the word out, because in a fair and just world, they’d be as big as XTC or Jellyfish.

Um, wait: neither of those bands was all that commercially successful, either. But I trust readers will get my point.

And they may also enjoy: